The mountains are calling and I have to go! ( John Muir)

After a few days in San Blas we had enough of the jejene (tiny biting bug) battle and left for the hills around Guadalajara. San Blas was fun though, we rode our bicycles around town every day, got the laundry done, checked out the ruins on the hill and watched the Three Kings Day festivities on January 6th. We rented a boat and went through the mangroves to the springs to swim in the fresh water. (I made a little video clip of that: “Birds of the mangroves” in the previous post)

I had been there and done that in the mid 70s and not much has changed since then.

We drove to Tepic where we got our camera cleaned and then spent a few days at a lake (Santa Maria del Oro). It was quiet there and other than the occasional sounds from the farm animals around us we hd a quiet time there. Our camper stood between coffee bushes and citrus trees. The hike around the lake was nice but marred by the fact that the view is blocked a lot by the high walls every house puts up for privacy and protection. 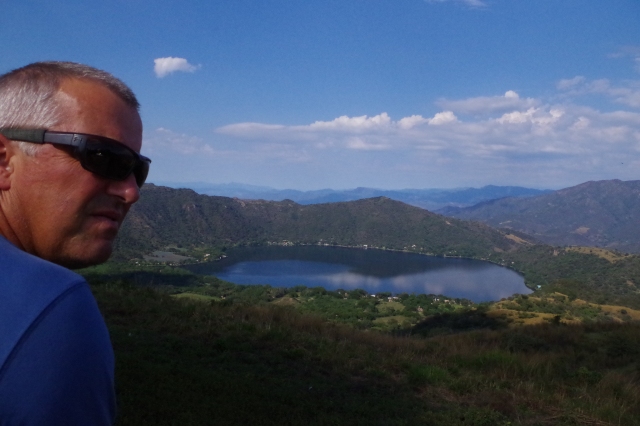 We wanted to visit Guadalajara, the secon biggest city of Mexico.

So we drove to a Chimulco nearby , a campground with thermal pools (Balneareos). The campground was populated with Canadian snowbirds and quite nice. We used it as a base to visit Guadalajara, took the bus to the city, several different ones, an experience by itself.

During our travels we get lost often and do not really care most of the time. But once we took a milk run bus from Tlaquepaque back to the center of the city and then decided to splurge and take a cab to the new bus depot which, we found out during the cab ride, was near Tlaquapaque. So that was a two hour round trip for nothing.

The historic center of the city was beautiful and interesting, there was a lot to see. Museums, markets, historic buildings, the usual. 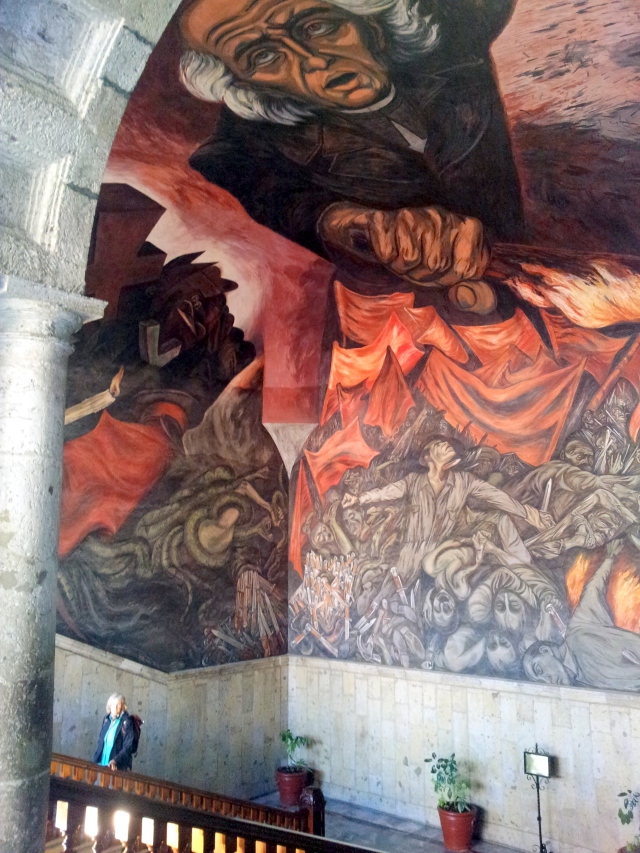 We got a room in an old hotel (Frances) that had its famous visitors pictures on a wall, the most recent one was from the 1960s, it showed Charles Bronson and some others actors. The giant chandelier in the entry hall had about as many years worth of dust on it. There were two bars on the same block and the live music very loud, which seems to be normal in this country. The second night we decided to go join them since we couldn’t sleep anyway. It was great to watch the scene, the women wore skin tight clothing and very high heeled shoes, there were mostly singles that waited for the men to ask them to dance. The beer flowed freely and the flirting too.

I do not know what the occasion would be for those dresses, the whole road was nothing but dress stores like these.

When we left the city we were dying for some clean air and headed east to a small town called Valley the Juarez at the 2000 m level. It is situated by a lake and the hills above town were covered with pine forests. It was great for bike riding, the town is quiet and the people friendly. We camped at Hacienda el Retiro and shared the field with a Canadian couple and two horses.

The town of Mazamitla is nearby, a popular vacation spot for people from the city. 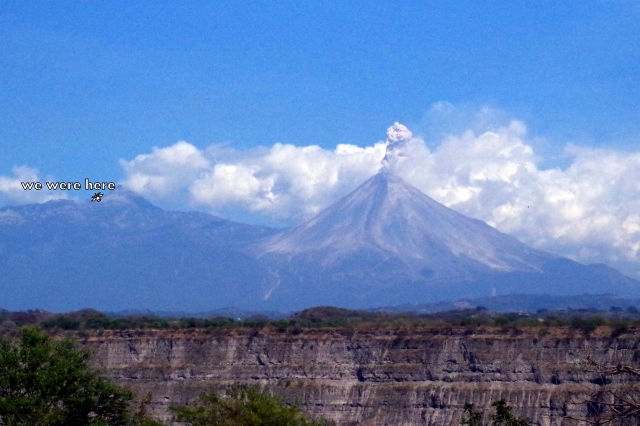 We took this picture on the 18th of Jan, it erupted that morning and again on the 21st.

We decided to go over to the two volcanos near Colima and try to go hiking there. So we drove up to Vulcan Nevada de Colima, up 3700 m where we camped in the pine forest. It is a decent, but att imes steep dirt road. We both had slight headaches from the altitude and decided to wait before attemting to climb the mountain. 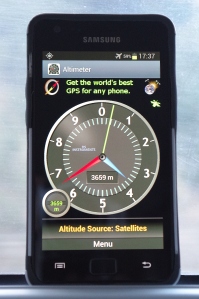 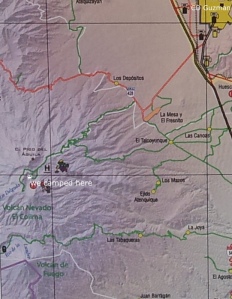 The second night we awoke to the strumming of a guitar and people talking around a fire closeby. A group of students from Guadalajara had showed up to go hiking the next day. So did we, hiked up a road that is the access for the cell towers and volcano observatory the next morning. Incredible views of the active sister volcano awaited us on top of the ridge. Volcan de Colima had just erupted two days before we got here and we could see the steaming rocks and lava tumble down the side of the mountains.

Centuries-old legends say that more than 3,000 years ago the God of fire looked down from the volcano, Nevado de Colima, to advise and give solace to the inhabitants of this region. His hot-tempered younger brother, who resided in the Volcan de Colima, instilled fear in the hearts of his worshippers and would severely punish those who didn’t please him.

We did some more hiking the following day, saw a few deer and big cat tracks on the trail.

There were also some mountain bikers up there, I don’t know how they did it because the air is quite thin and it makes breathing hard.

Many bushes were in full bloom and you could see almost every color, at night we had frost so these plants looked quite tropical but must be hardy.

We drove back down after a few days and were greeted by the heat and smoke (this time from the sugar cane fields) in the vally. Sugarcane and corn seem to grow everywhere in the valleys, there are coffee plantations and avocados on the flanks of the volcano.

Our XP camper was coated with ash when we left the area.

Coca Cola is a very popular drink in Mexico and it is still made with cane sugar instead of high fructose corn sirup. I bought a bottle and you can really tell the difference, it tasted like the coke of my childhood.

We have good friends from Washington State vacationing on the coast and decided to head that way to visit them and for some beach time. Instead of the toll road we took a backroad through the mountians that was very beautiful. But it was afternoon and we always try to find a camping spot early so we do not get stuck somewhere where we do not want to be when it gets dark.

Mexicans like their balneareos, that can be a pool, or an aquatic park with slides or just a local swimming hole where they dam the creek or river and charge a few pesos if you went to go for a dip and swim. We turned (hard) left at Agua Fria, drove down to the river and asked if we could stay overnight. “Si,si” they said and we parked by the river near the cows. The family lives on the premises, a small farm with chickens, ducks, 4 dogs and six cows, each with a calf. The river was cool and refreshing, we decided to stay for a few days and enjoy this great place. During the day sometimes some Mexican families came for picnicks and swimming. The owner cookes for you if you are hungry. Fresh eggs from the chickens, cheese from the cows (like cottage cheese), quesadillios, ceviche. Whatever is on hand.

Grandpa and son milked the cows every morning and called us over every time asking if we want some milk to drink. We soon found out that they did not mean straight milk. The first day they showed us how to mix some cocoa powder with alcohol (the bottle says it is for desinfecting purposes) in a large glass, then you go over to the cow being milked and the milker will fill your glass with fresh cow warm milk. 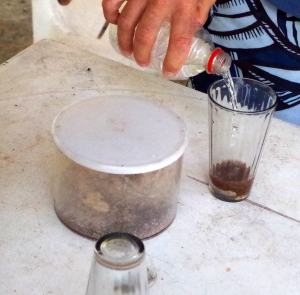 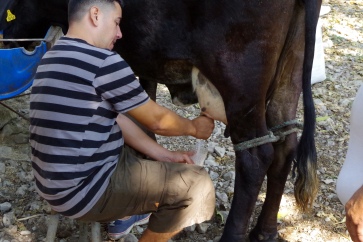 I have to say it tasted very good, but it was just a bit early in the morning for a drink. So every morning it was the same ritual, we came over and Günter had his daily breakfast cocktail. I asked if they do this all the time and they said yes, every day – all year. That’s why grandpa looks so good.

We really liked that family and their place, I can only recommend it. 15 pesos a person for swimming, we gave them another 20 for camping. Toilets are clean, no showers but a great clean river:

8 Responses to The mountains are calling and I have to go! ( John Muir)