If you plan a trip to Antarctica, do NOT skip South Georgia Island! It was the highlight of our trip by boat. If you are familiar with Sir Ernest Shackleton and the “Endurance” you have heard of it. On his epic journey to find help for his stranded crew he ended up there, crossed the island from King Haakon Bay to the whaling station at Stromness Bay.

The island is covered in snow and ice, a windy place.  We had to bundle up because of the wind chill, it really was not that cold there.The world’s largest breeding colonies of king penguins live here, close to 600 000. Their numbers are increasing. We visited several different bays and got to watch them. They, as well as the marine mammals on the beaches were totally fearless of human beings.

Life on the boat was great. Our room was comfortable and clean and soon we were settled in and enjoying the routine. This is not like a regular cruise, wake-up calls could be early, as early as 4.30 am one day. It all depends on the weather and tides. Bundle up, grab a quick cup of coffee and off you go. Not too much coffee though, because you are not allowed to go to the bathroom while on shore. The rules are strict when you step on the island, our boots get thoroughly cleaned before we leave the boat so not to introduce new plant material, even the velcro on the jackets gets checked for seeds. Rats have been a big problem here, they are slowly getting eradicated. (They did not check our pockets for rat babies 🙂 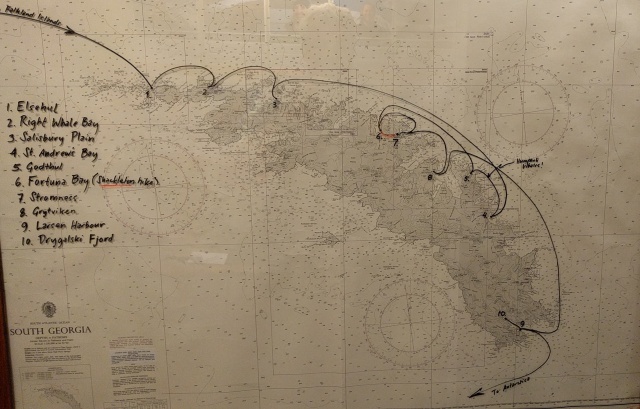 The Southern Elephant Seals rule the beach, our presence did not bother them at all. The hiking pole is also a way to keep the occasional pesky fur seal at bay. 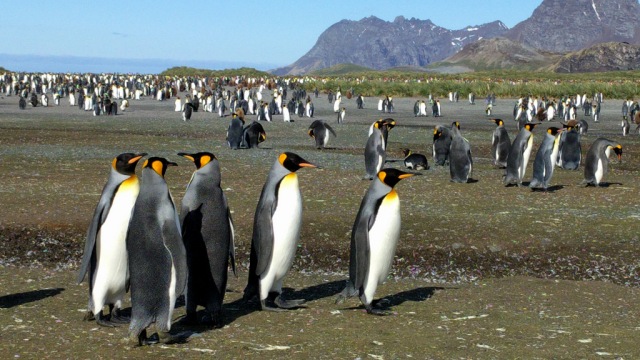 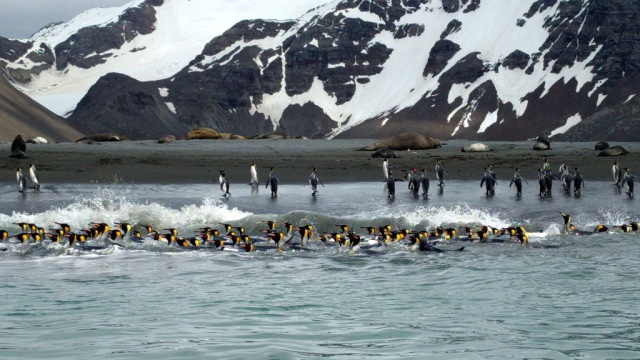 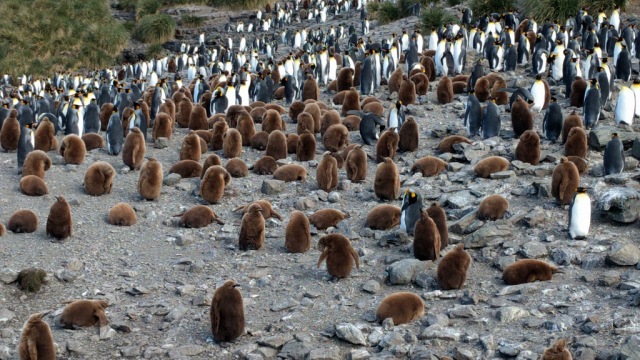 These chicks have already survived one winter and are still being fed by their parents. 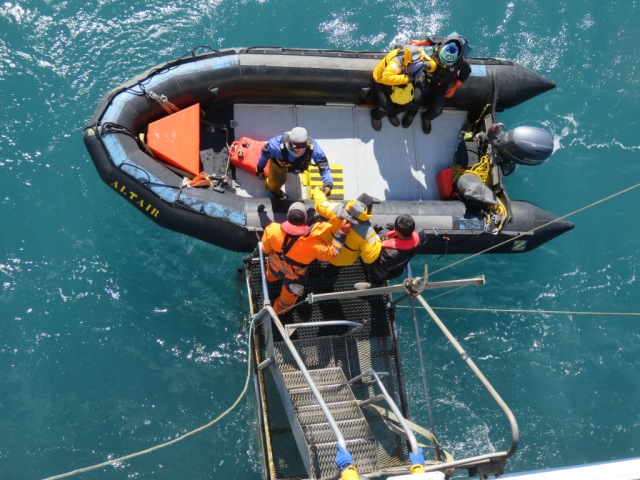 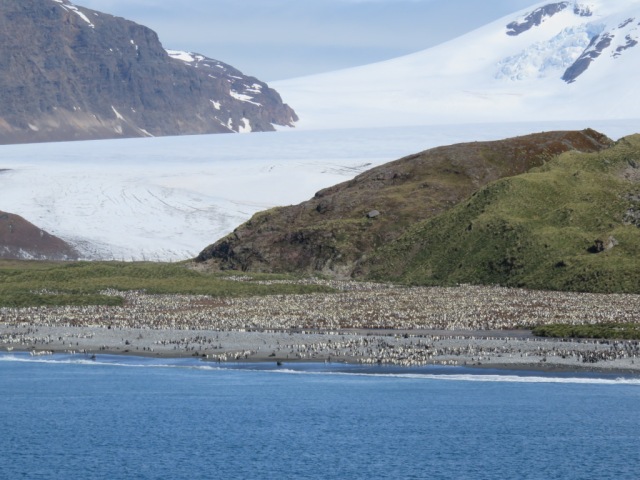 One of the colonies of King penguins. 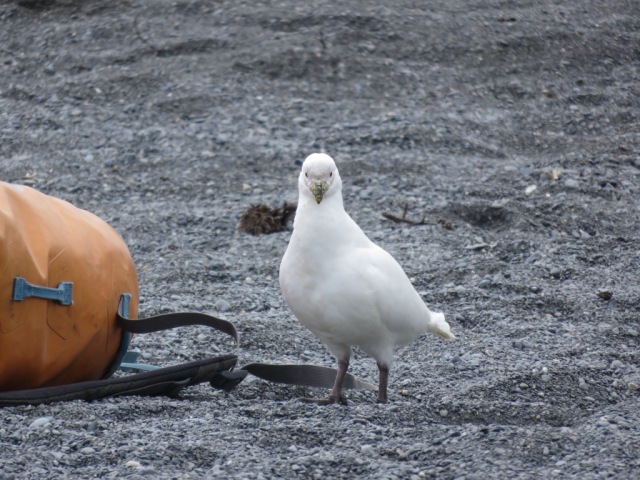 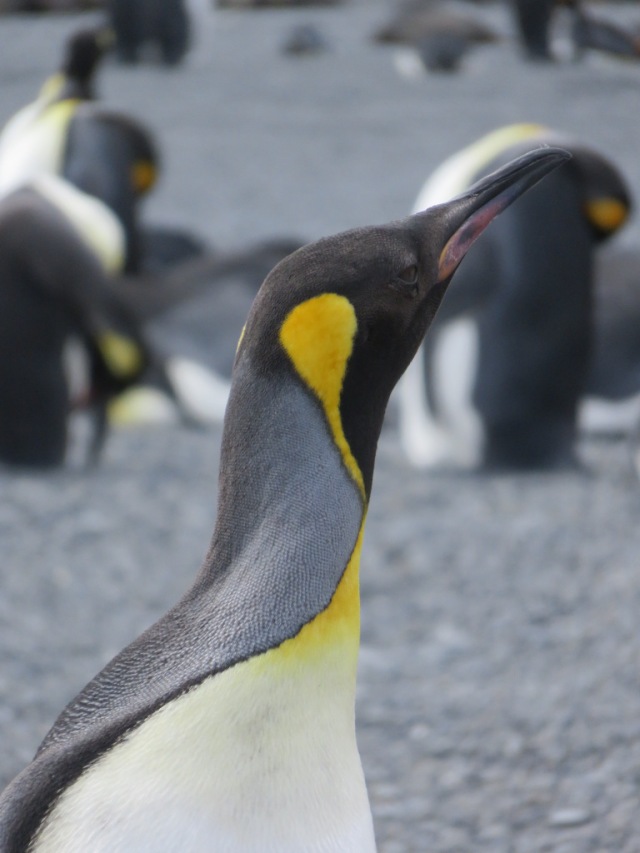 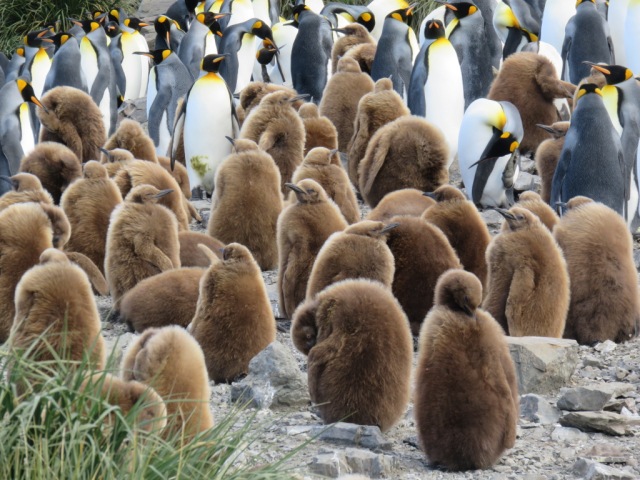 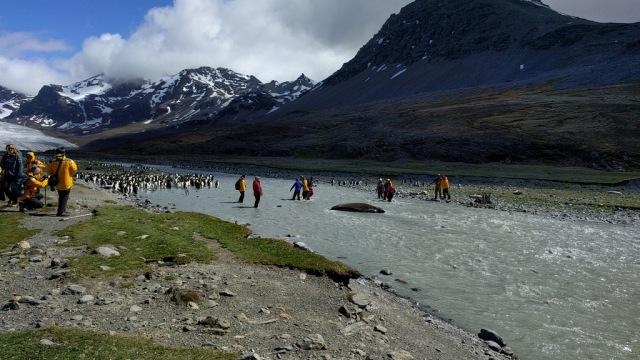 What looks like a rock in the water is a giant sleeping Elephant seal. He moved only once the whole time we forded the stream – and actually came closer.

Yes, that is Barbie at a photo shoot.

Burnet is one of the few native flowers that can grow in this environment. 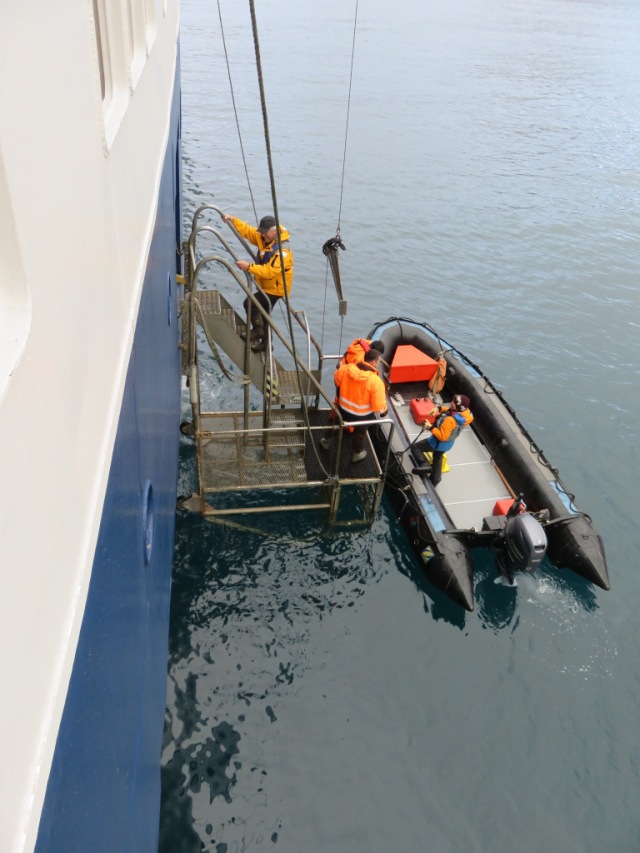 That was a great day, tomorrow another bay with different penguins. 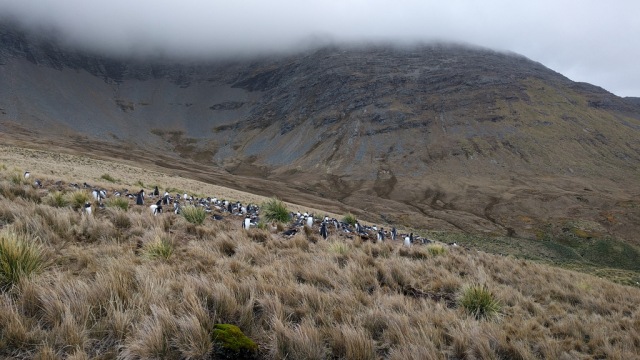 Gentoo penguins nest way up on the hills. While Günter hiked up to a lake I sat up on the hill in the tussock grass for more than an hour watching their nesting behaviour. They keep working on the nest even though it is perfect, stealing material from other nests and getting pecked at for it. As I looked up to the ridge I saw a group of them climbing up that way. Whatever posesses them to go that high I don’t know. 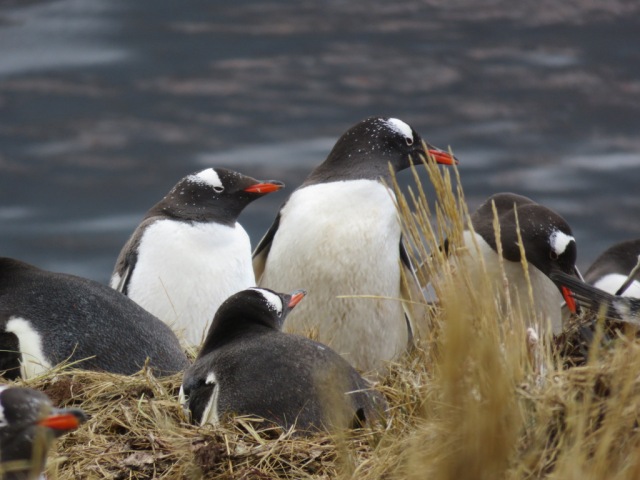 Reindeer were introduced by the whalers as a source of food about 100 years ago. The were devastating the plant life and since then have been eradicated. 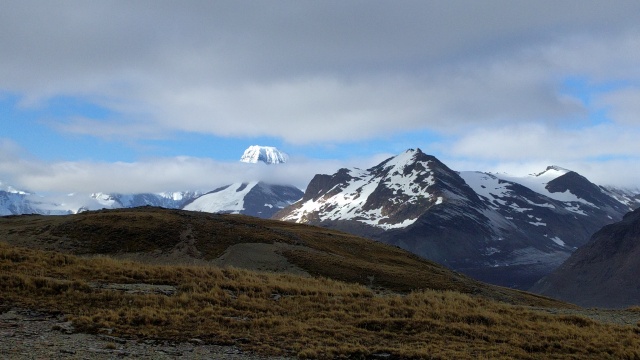 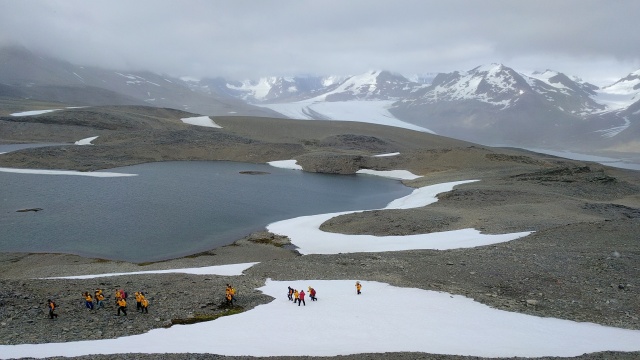 Günter, Fred and Doris arriving at Stromness after the three hour hike. 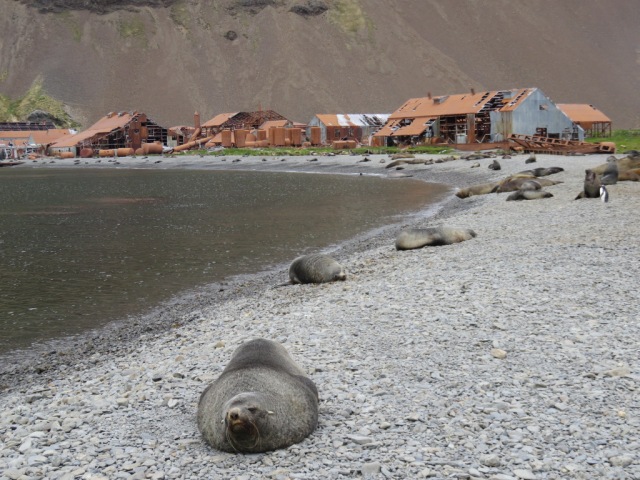 See Günter run, he almost stumbled over the fur seal under the propeller.

A whaling station with a big blubber rendering operation in its days. 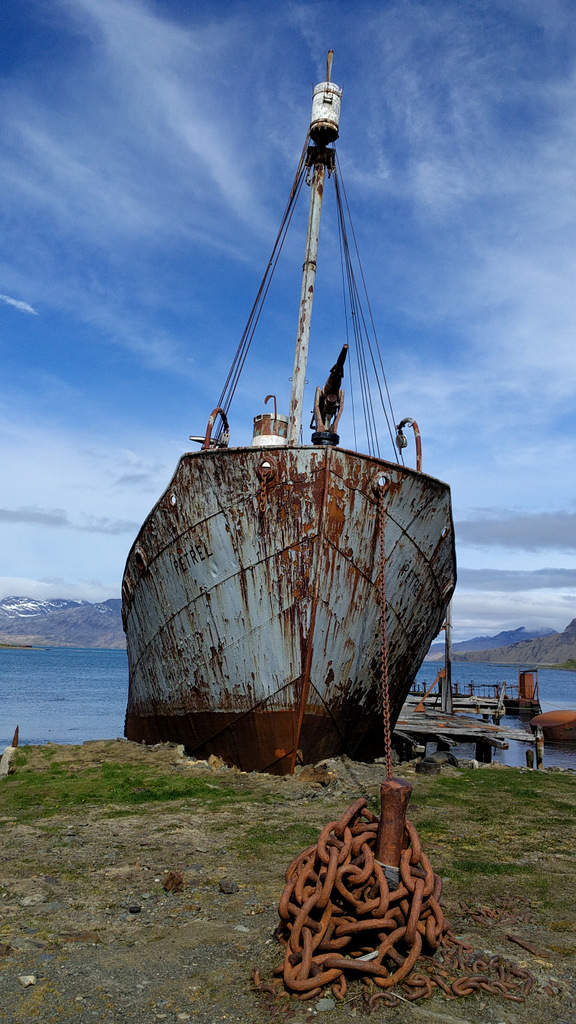 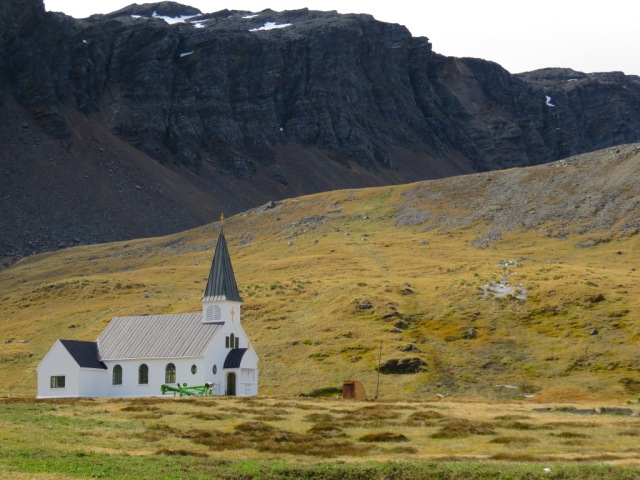 The whalers built a church and ski jump, must have been Norwegians, they have their priorities. 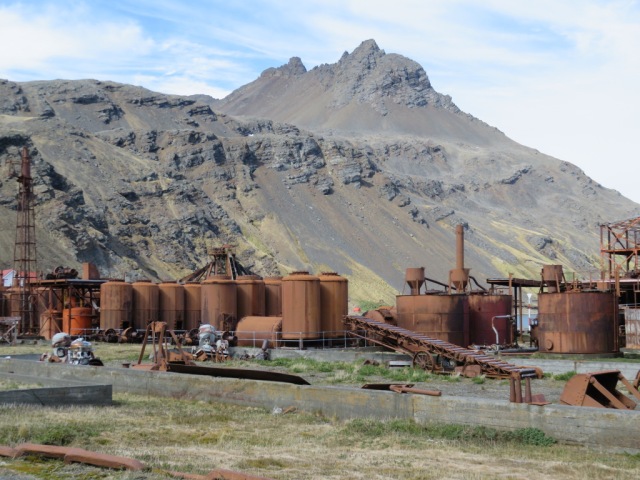 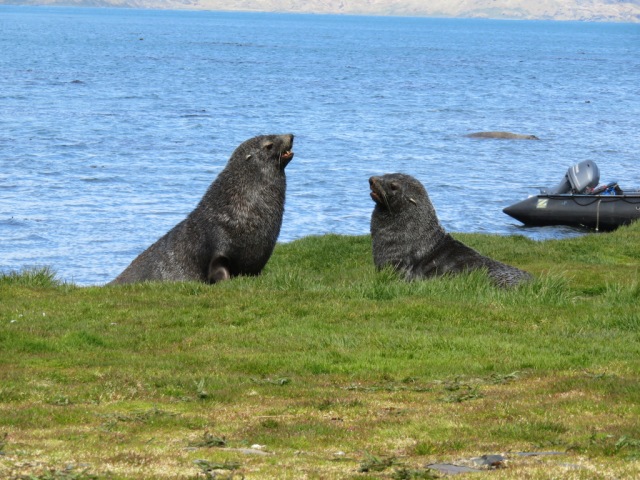 A face only a mother could love 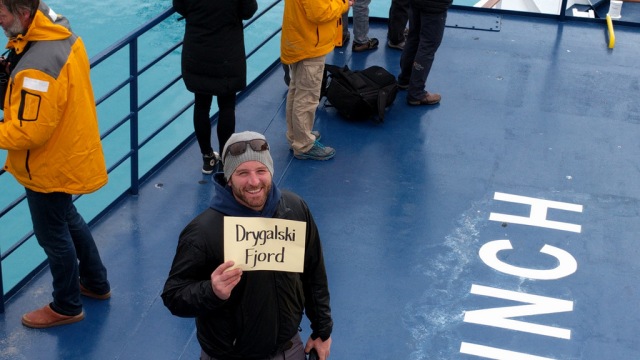 This is one of our great guides “Sean”, he lives in Juneau. 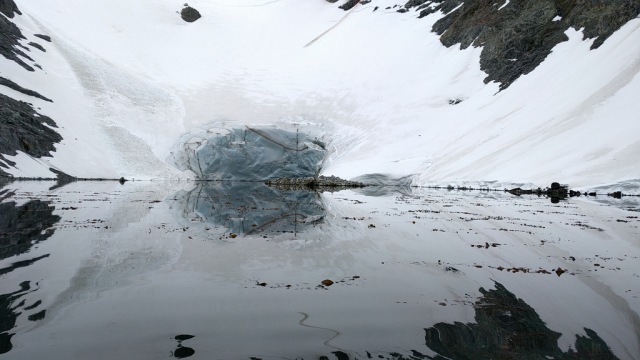 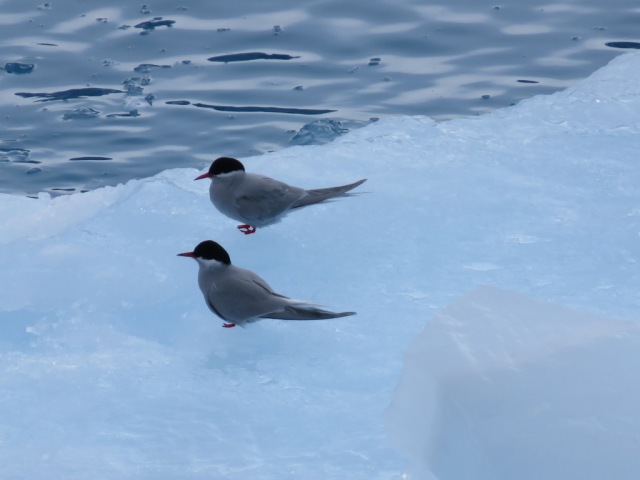 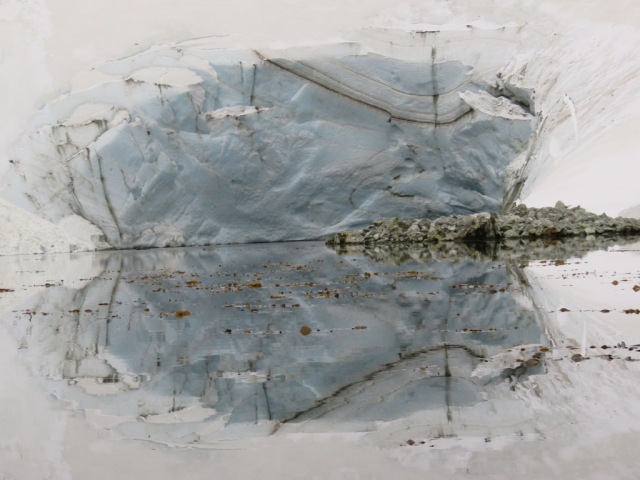 Good bye South Georgia and on to the Antarctic Peninsula 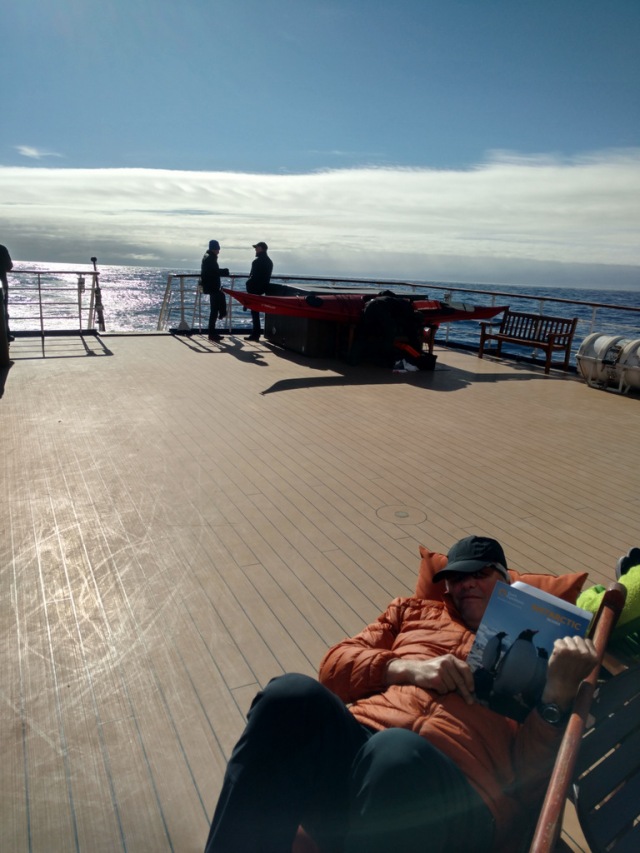 This entry was posted in South Georgia Island. Bookmark the permalink.