We left the Michoacán coast and headed up into the mountains again, there were several police stops but they usually just gave us some advice where not to go and sent us on our way. We also saw armed civilian groups and military and were not sure if that was normal. 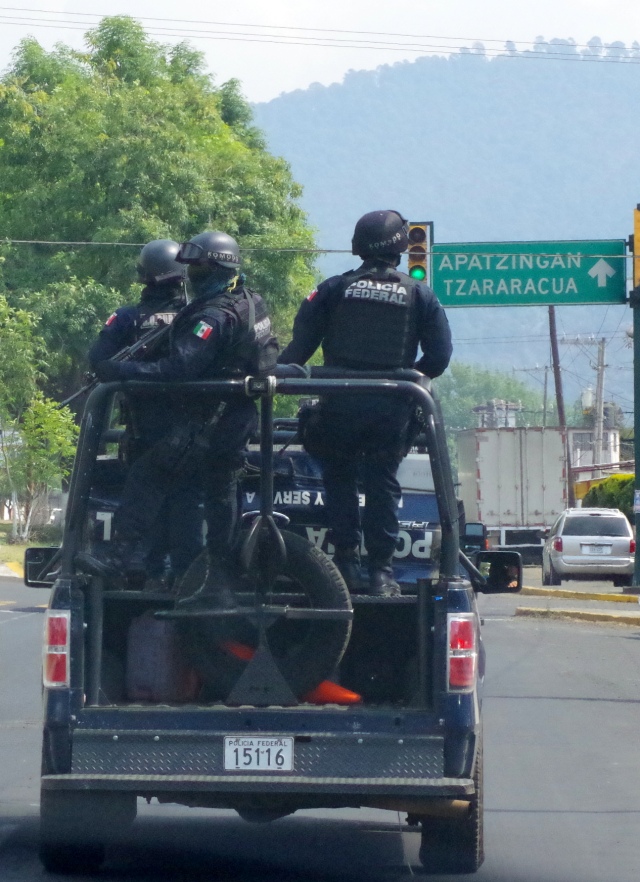 (We found out later that soon after we were in that part of the state, the leader of the Knights Templar drug cartel that had the state in a grip had been captured. His cartel had replaced “La Familia” cartel after the death of their leader.)

We came to Uruapan and parked in the parking lot of hotel “Pie de la Sierra”, it was full of police trucks and we felt save. 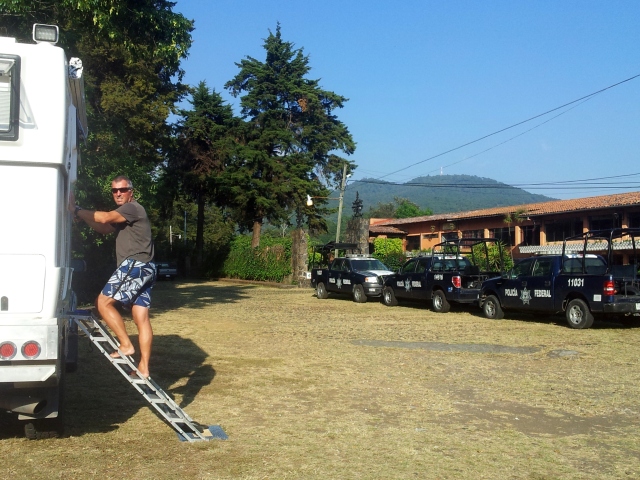 The hotel had a pool and wifi, we stayed for two days and we explored the city which I really liked. It has some great buildings, like the former church now library, and former cinema now food court. The park is lush and cool and walking distance from downtown. We bought two trout from the farm there and had a delicious trout dinner in our camper.

Avocados, coffee and pistachios are the main crops here. On our way to Patzcuaro we stopped at Angahuan for the night and walked to the site where the church of San Juan was engulfed by lava from volcano El Paricutin. 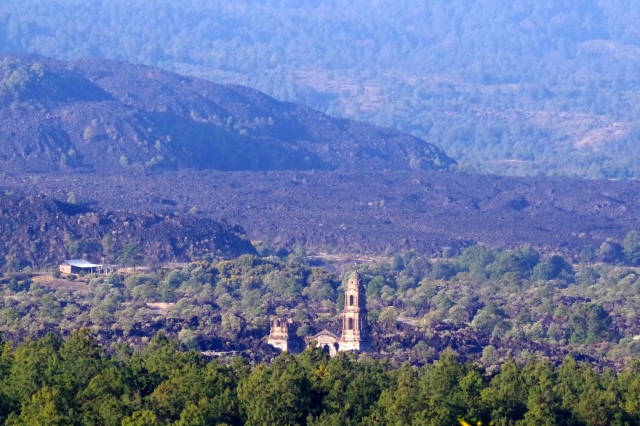 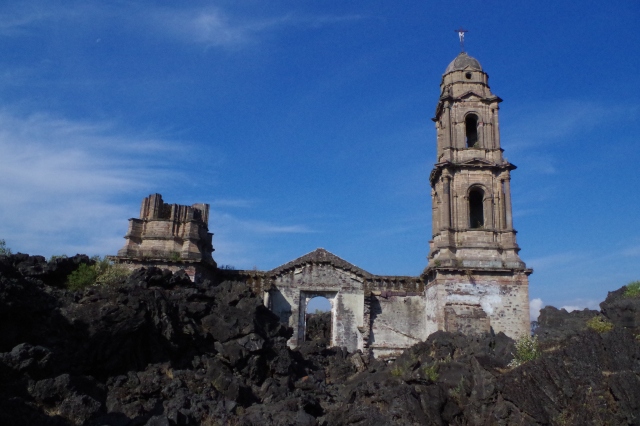 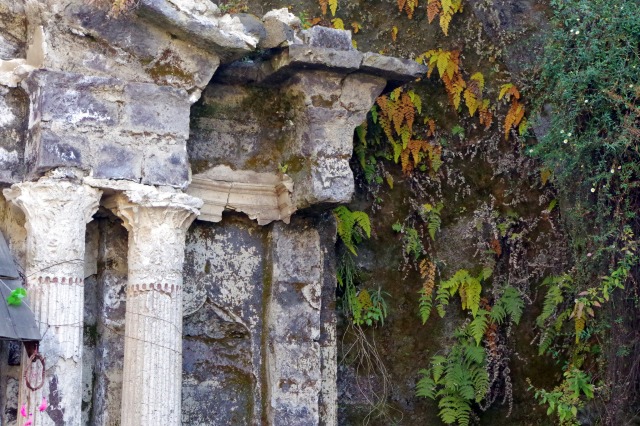 Patzcuaro was the next town, there we broke out our bicycles and explored settlements along the lake. The town is nice with restored colonial buildings and several churches. The museum of folk art was our favorite museum so far. There was a gathering of the Purepechas of the outlying towns and we saw beautiful national costumes. I was very impressed by the workmanship and beautiful people wearing their outfits with pride. 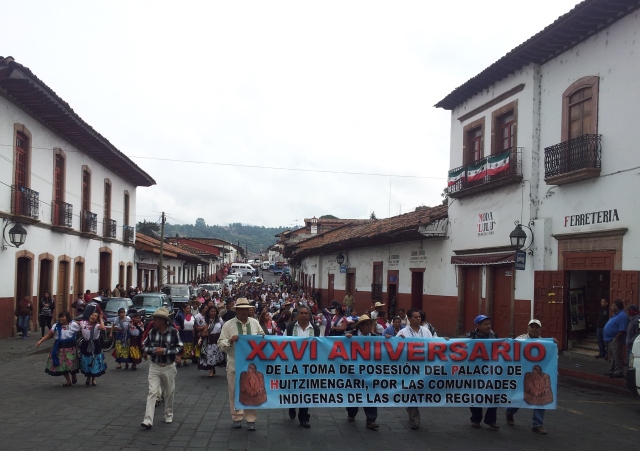 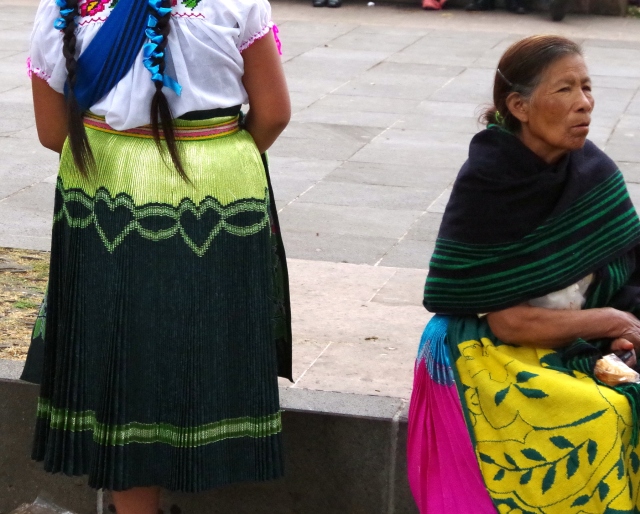 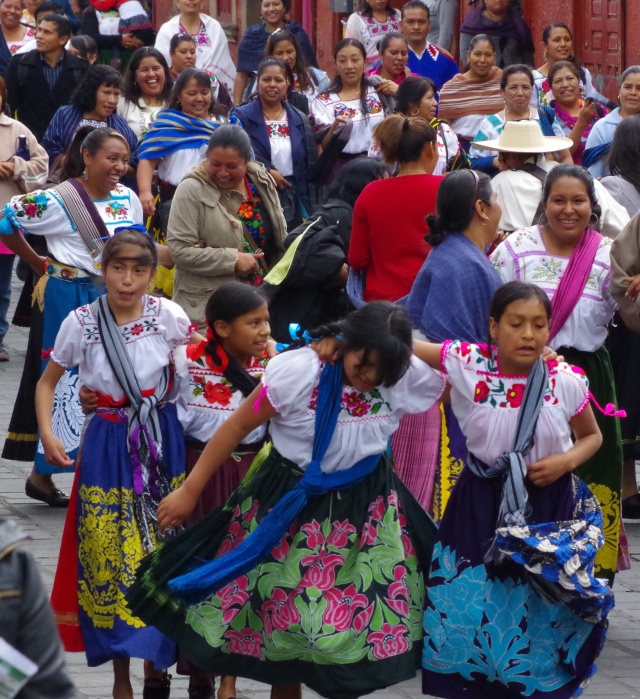 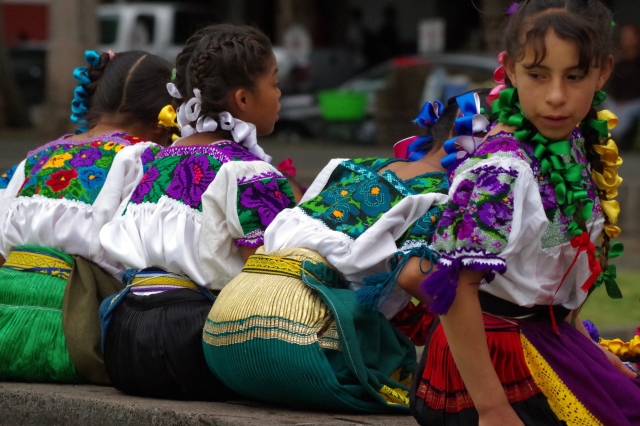 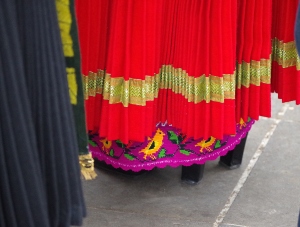 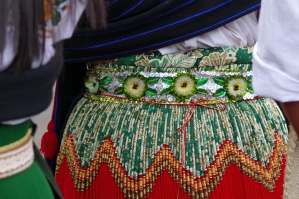 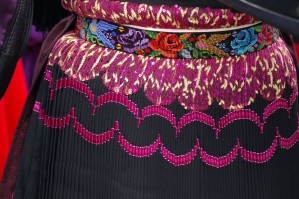 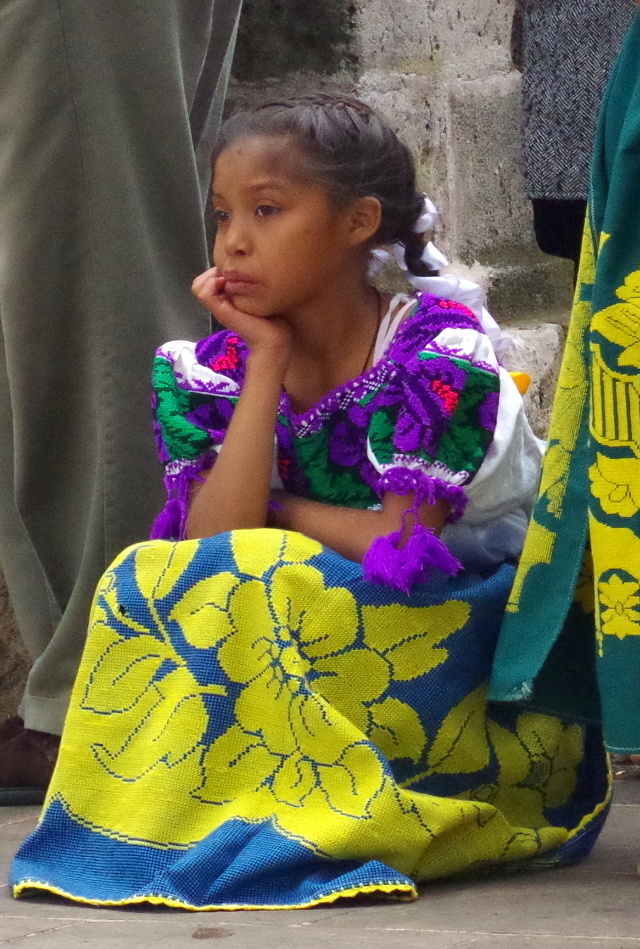 Carneval was a lot of fun to watch. Little “Toritos” that looked like giant piñatas ran through town while young men in girls dresses teased it by dancing in front of it and waving flags. 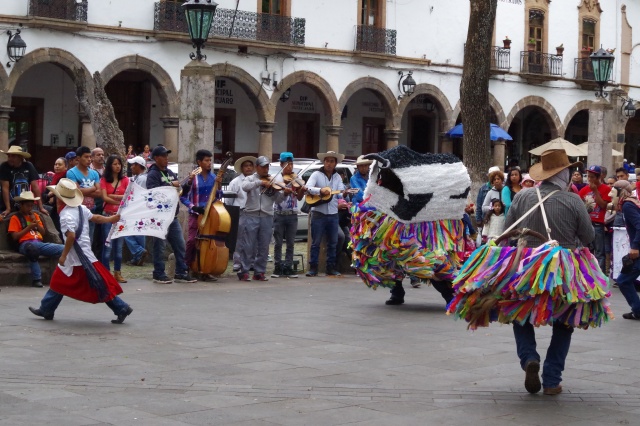 We liked Tzintzuntzan best, its a small town along lake Patzcuaro. We went to the church of the monastery of San Francisco and were amazed at the flower decoration in the church and at the entrance. The church started filling up and soon we realized that we were attending a wedding. We stayed and watched. The groom came riding down a lane lined by 600 year old olive trees, flanked by his friends, all on beautiful horses. 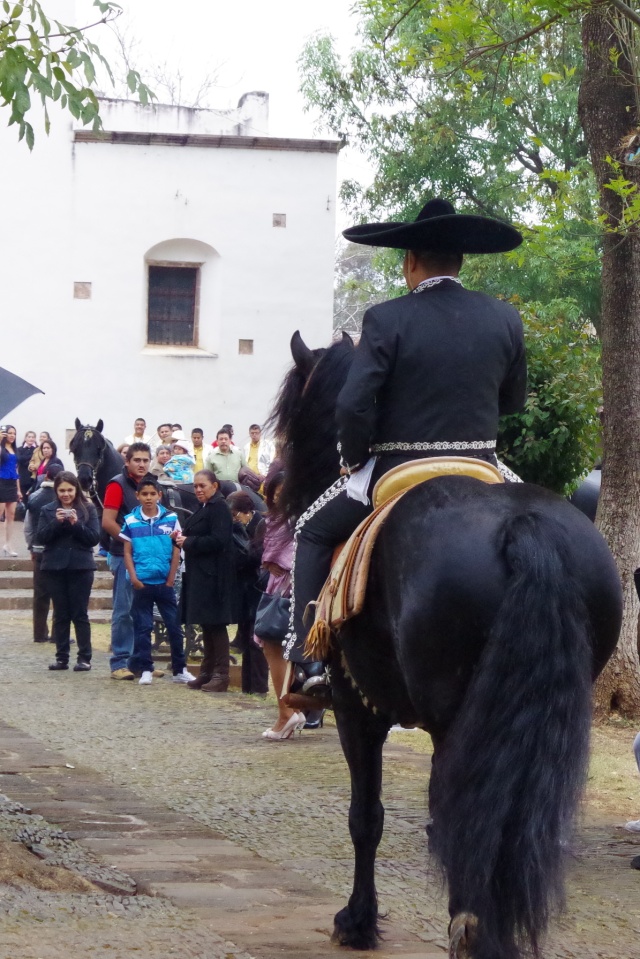 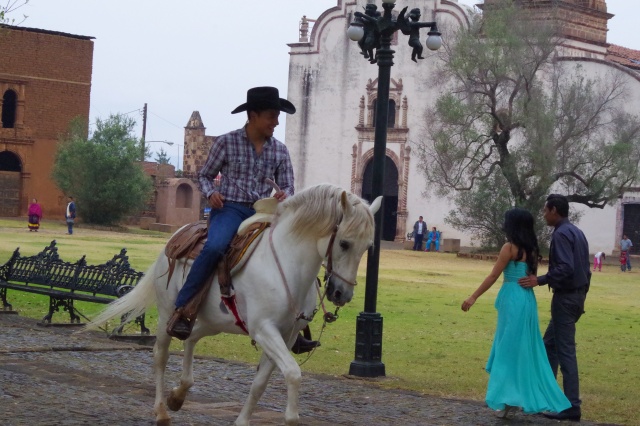 The bride came in a carriage with her parents. 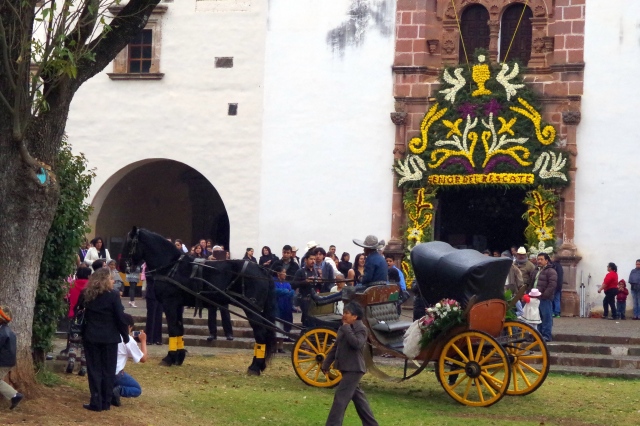 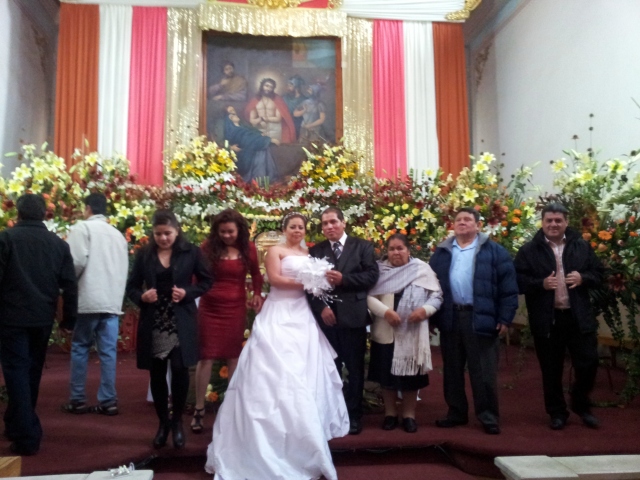 After the church ceremony the bride and groom, family and friends as well as the band, walked through town to an open air restaurant . 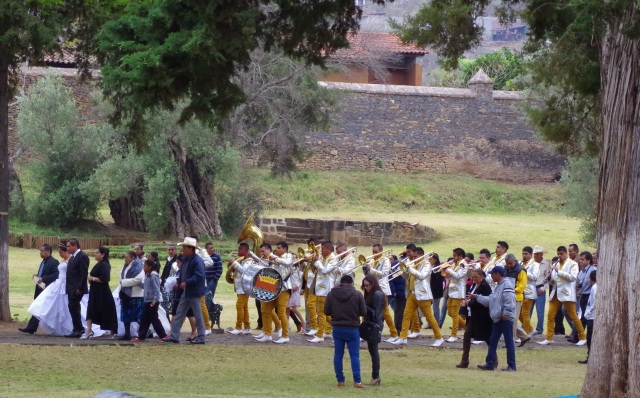 The weather was overcast and rainy for a few days and we stayed and took care of laundry and shopping before heading toward the little town of Macheros to find the butterflies.

3 Responses to more of Michoacán