A small country with lots of diversity. Formerly British Honduras their official language is still English. On the coast it boasts coral reefs, islands and atolls, white sand beaches and mangrove forests. The interior was probably all jungle at one time, now a big part of it has been cleared to grow food, especially in the northern part of the country. Diverse are its inhabitants as well, there are the Mayas, “Whites”, Garifunas* and Creoles.

(* The Garifuna people are black people of mixed ancestry (African, Carib Indian and Arawak Indian) from the island of St. Vincent. In 1797, after fighting with the British, they were exiled from St. Vincent to Roatan; a small island off the coast of Honduras in Central America. After finding Roatan uninhabitable they set up villages along the Caribbean coast of neighboring countries Guatemala, Belize and Nicaragua.)

We crossed the border and immediately you could tell that you were in a different country, pastel colored houses on stilts give a distinct Caribbean feel. The music you hear in the towns changed from ranchero to reggae, it even smelled differently. To be able to speak English again and actually have a conversation without feeling like a moron was a real treat. It is also quite a bit more expensive than Mexico and the beer bottles are smaller, “thanks Billiken !” We wanted to go swimming in that amazing blue/turquoise sea and drove out to a little town called Sarteneja. It was really laid back there; the Backpackers Paradise had a spot for us under the mango trees. Needless to say, since it is mango season, we eat a lot of mangos, heaped them into our müsle and salads. We ate fresh fish a Richies Restaurant and found out too late that he would have let us camp right on the shore in front of his place. Sarteneja beaches are white and gorgeous but swimming from shore is not easy because it is shallow quite a ways out, however one is allowed to use any dock (yes, the private ones too) to walk out and jump in where it is a swimmable debt.

Riding the bicycle to Sareneja

The drive out was long, the road mostly unpaved and dusty, we came through an area called New Belize and saw some Mennonites in their horse-drawn carriages and working the fields. You can’t miss them, they have their own distinct fashion: The men always wear black pants with suspenders, light-colored dress shirts and a straw hat. The women were longish dark dresses and either dark scarves or white scarves or straw hats with matching ribbons. Like the world stood still 150 years ago. 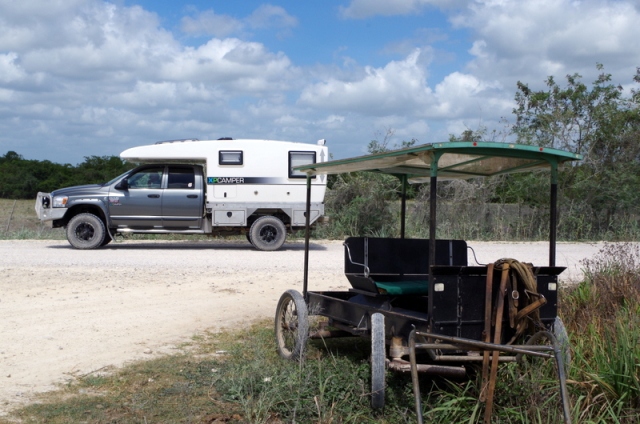 I have always been fascinated with the Anabaptists, read a book about the Hutterites and another about the Amish years ago.( The word is derived from the first leader of this group who was from Switzerland and whose name was Amann, hence Amisch) During the Reformation in Europe in the 16th century they had to flee and left for the USA and Canada.

We passed them on the road to Sarteneja, the women never smiled back.

.We left Sartaneja after a few days and decided to find more Mennonites, on the map there were German town names near Blue Creek close to the Mexican border. When you come to Blue Creek you can tell there is something different going on there. No garbage in the ditches and fields, beautiful homes and rolling hills with cattle, rice and corn fields. It could be anywhere in the farm country of the Pacific Northwest. This is Mennonite country, they are clearing the jungle and building more farms. They feed Belize and all its tourists. They control the animal feed business, have a chain of car part stores and make and sell furniture. Blue Creek is a “progressive” Mennonite community, they have trucks and wear more modern clothing.

This is where the Mennonite clearing ends and the jungle starts.

Not so in the town of Shipyard, this was one of their first settlements in Belize (1958). Here the more conservative Mennonites live and work. They use horses for logging, farm work and to pull their wagons. Very beautiful and well taken care of horses. 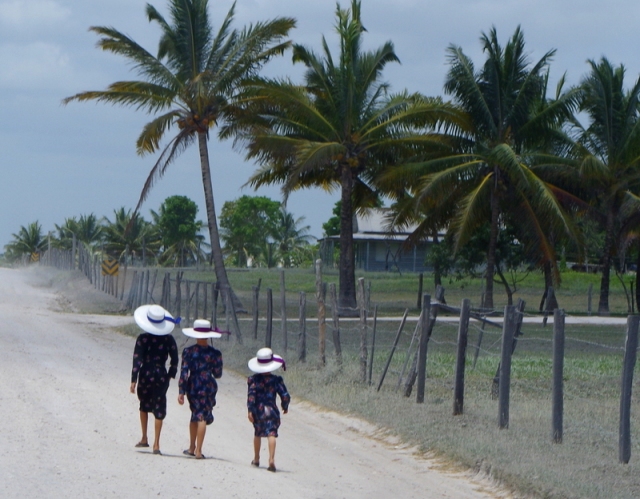 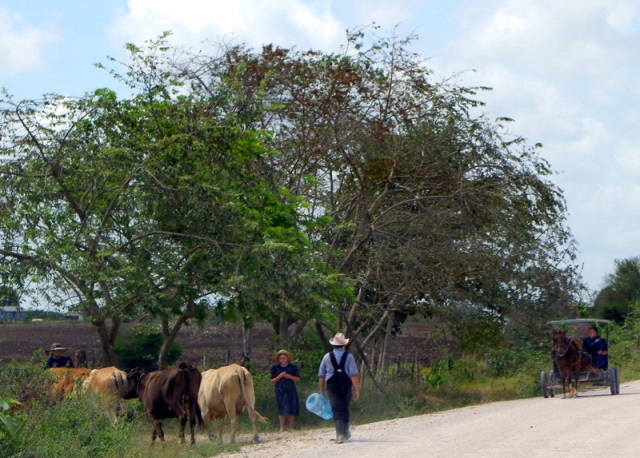 It was late afternoon and we decided to go to La Milpa and see if we can camp in the jungle. We left Blue Creek and turned into a road with a gate. “No”, we were told, we need to have written permission to enter the Rio Bravo Conservation area. Well : Günter told the gate-keeper that we came all the way from Germany to see La Milpa, an unexcavated Maya city with over 60 temples. Finally the gate-keeper got on the radio and called in to explain and the guy at the camp made an exception. The gate lifted and we were sent to a camp where the archeologists usually live, they were not due to arrive until May. So we had 8 composting toilets and 8 showers , 4 for Günter and 4 for me. 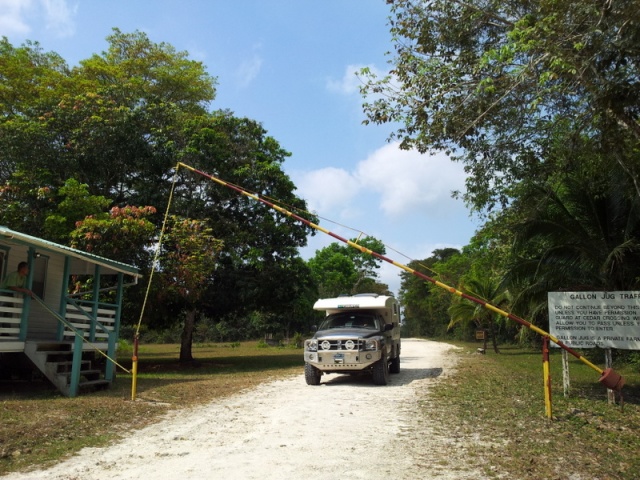 The jungle was alive with parrots every morning and hummingbirds were buzzing around. 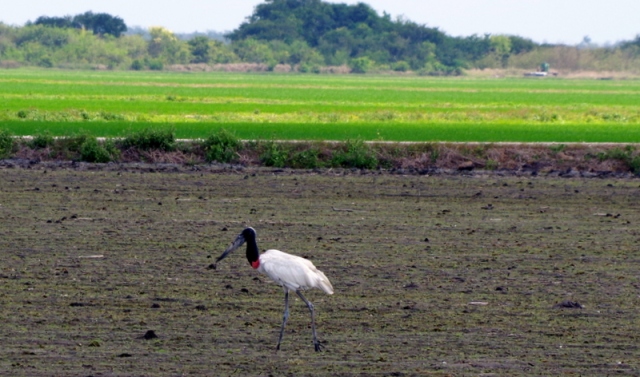 These rare storks called Jabiru were hanging out in the rice fields near Blue Creek. 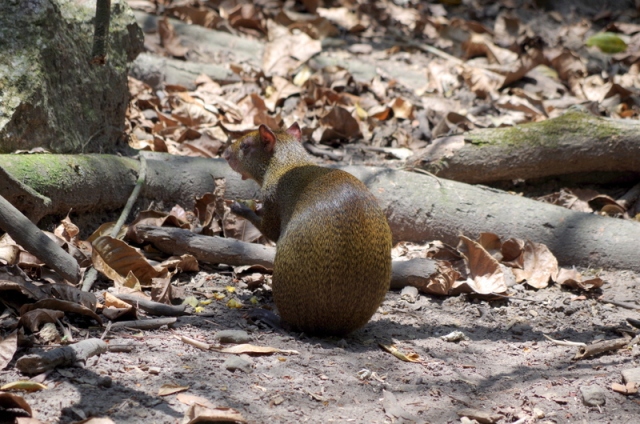 They were all over the jungle. 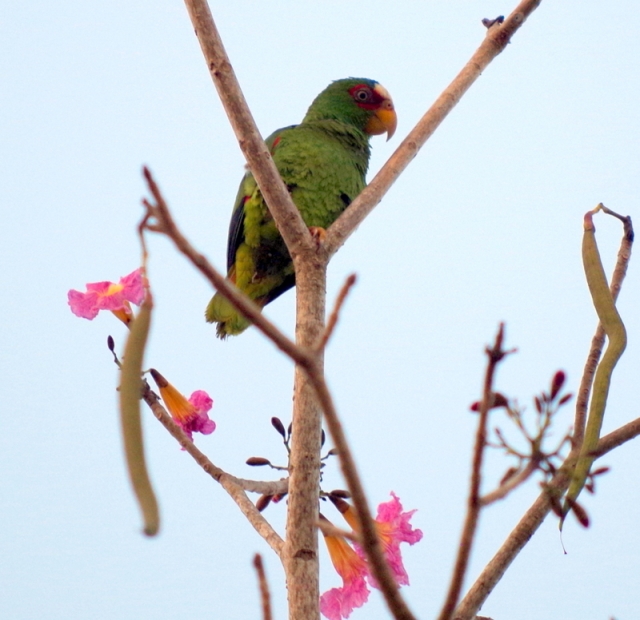 These parrots hung out above our camper at La Milpa. 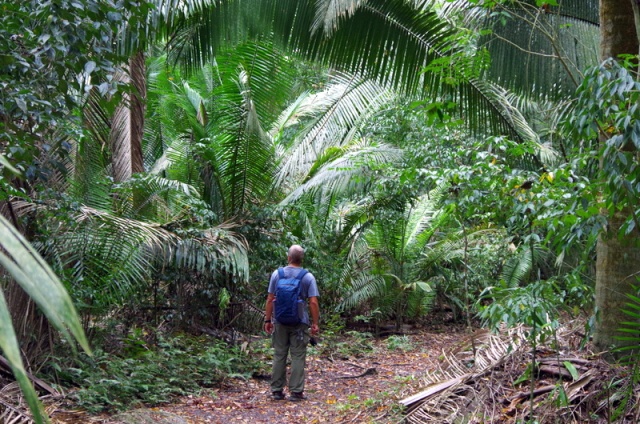 Five km through the jungle to explore the Maya site. 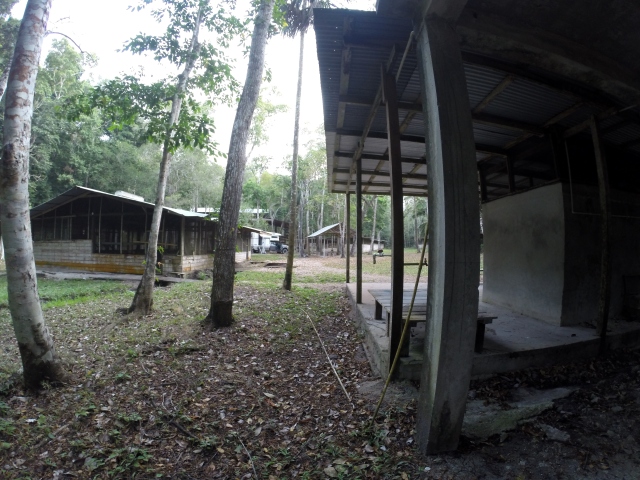 The archeologists camp at La Milpa. Can you see our camper?

There was a crew of 13 people from National Geographic at a camp not far from us, they were there for a month to film the wildlife. The first night we were told that had seen a jaguar in the camp, well we didn’t see it, that would have been too good to be true. We hiked the 5 km to the archeological site the next morning and it really was amazing after having seen all the restored and rebuilt pyramids in Mexico . It gives you an idea how much work is behind excavating such a place. We climbed one 40 m high pyramid with the help of a rope, it was very steep because the walls had eroded away. Standing on top and looking across the jungle we wondered how much more was hidden out there. Several of the smaller temples had holes from grave robbers, some very old. I guess that profession has been around for a while. 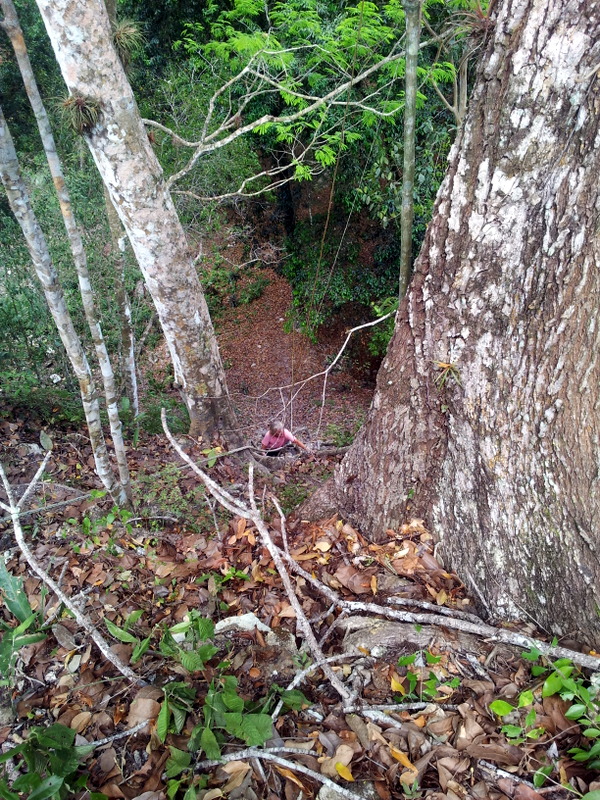 Climbing a pyramid the hard way. 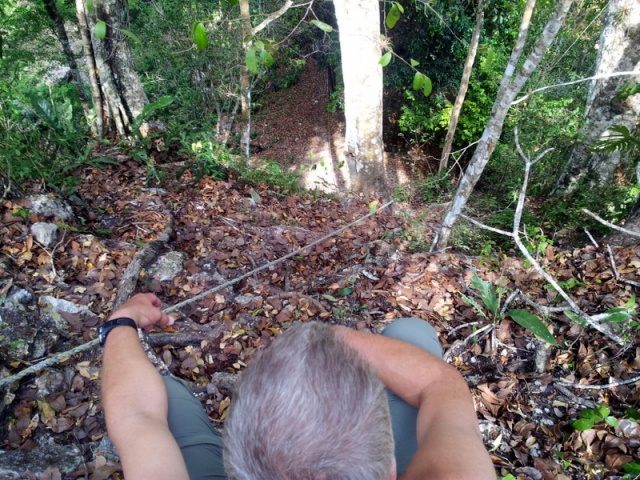 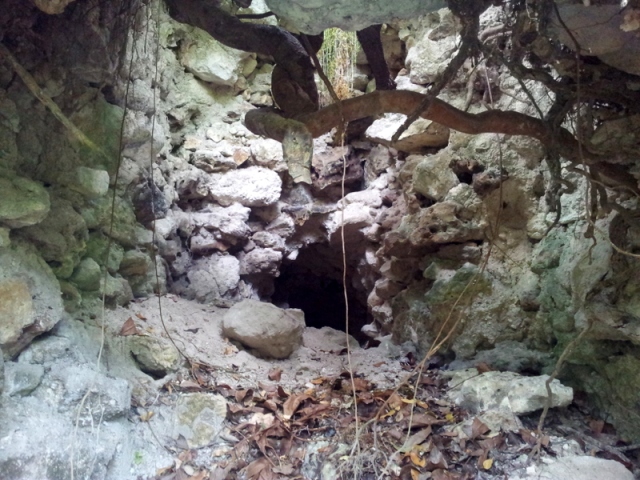 Grave robbers were here many years ago (we hope).

After a few nights in the jungle and an ant attack on my left foot we left for the coast again. The manager of the camp asked us to let everybody know that they are NOT set up for campers and did not want us to advertise . I think you can reserve a cabin there or Gallon Jug if you want to go there. Back to the Caribbean. 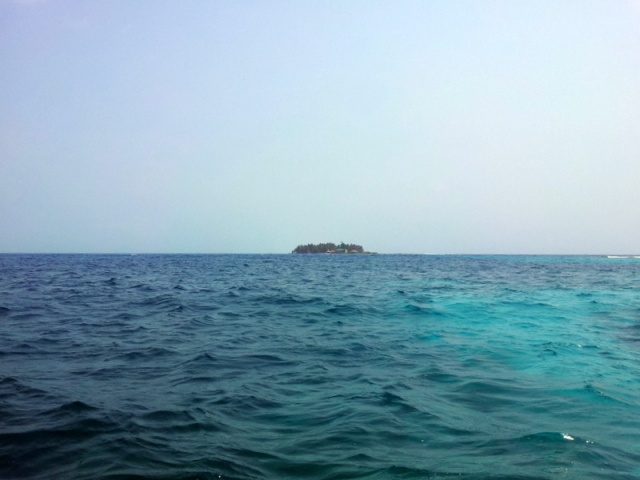 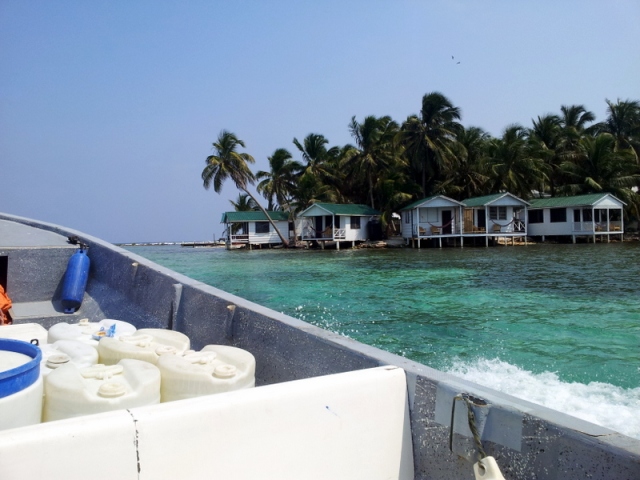 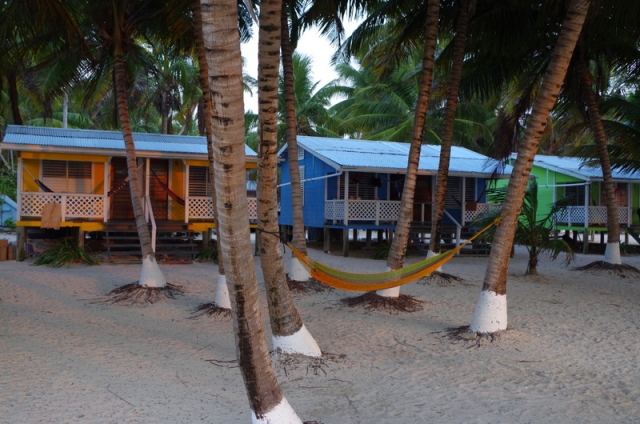 The cabins on the beach at Tobacco Caye Lodge. 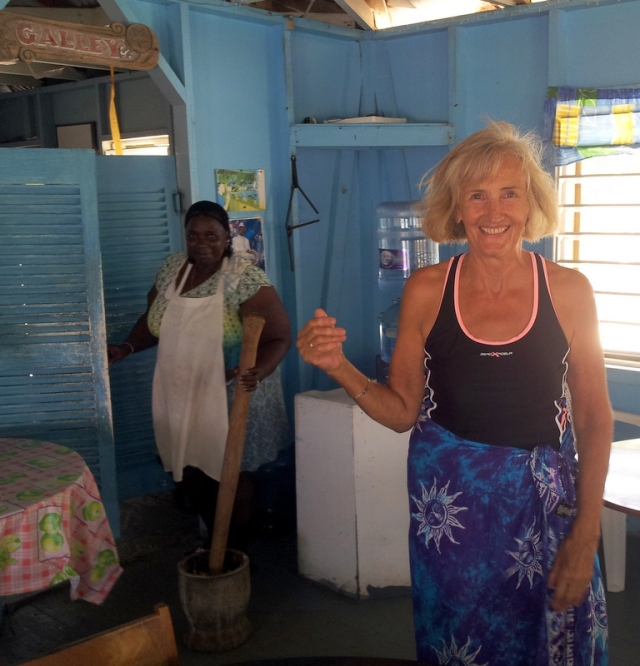 Tobacco Caye is a tiny island (240 x 125 meters) located 16 km out at the coral reefs, it has 18 year round inhabitants, fishermen. There are a few cabanas for rent and there is not much to do there except snorkel, read and snorkel. We had been there 10 years ago and went back to the same place, the Tobacco Caye Lodge. There are two Garifuna ladies, Judi and Anna, that cook for you, three times a day they ring the triangle, you can hear it anywhere on the island, and you march to the cook house and get fed. We had a lots of fun with the ladies and asked for Garifuna food. That was interesting and very good. They shred the cassava and sing their Garifuna rhythmic a capella work songs, they pound plantains to make Fufu, they shred coconut and make a liquid they add to the pounded plantains , chop the conch……The result is a tasty conch soup with Hudutu. We also had Bundiga: Banana, grated and cooked in coconut milk, seasoned with local herbs and served with fresh snapper, and we even had a Garifuna hot cakes breakfast.

Judi and her helper. 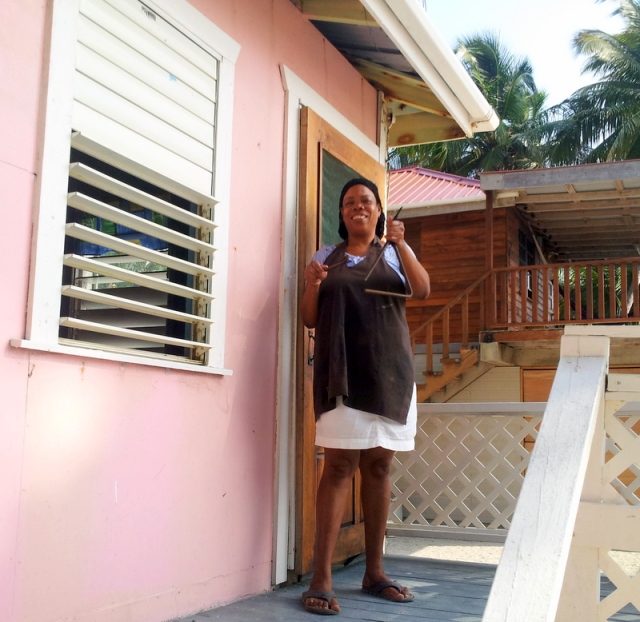 Come and get it! 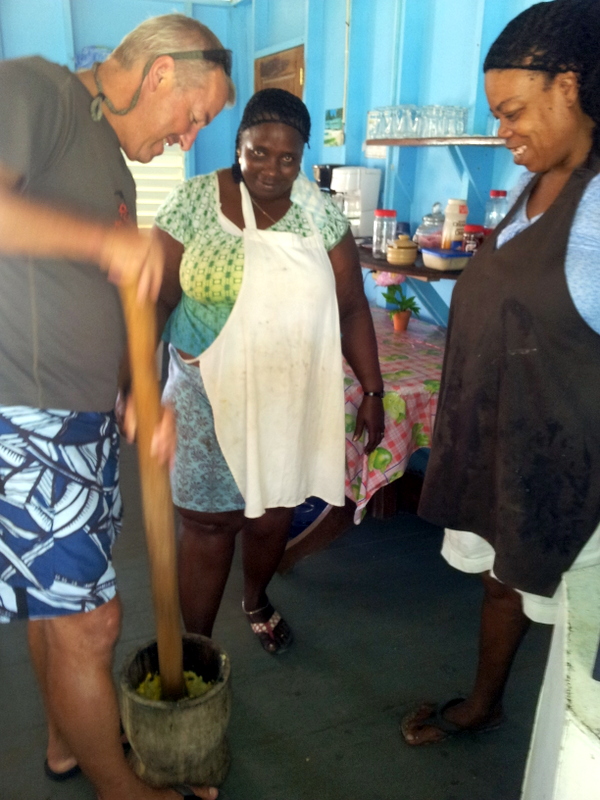 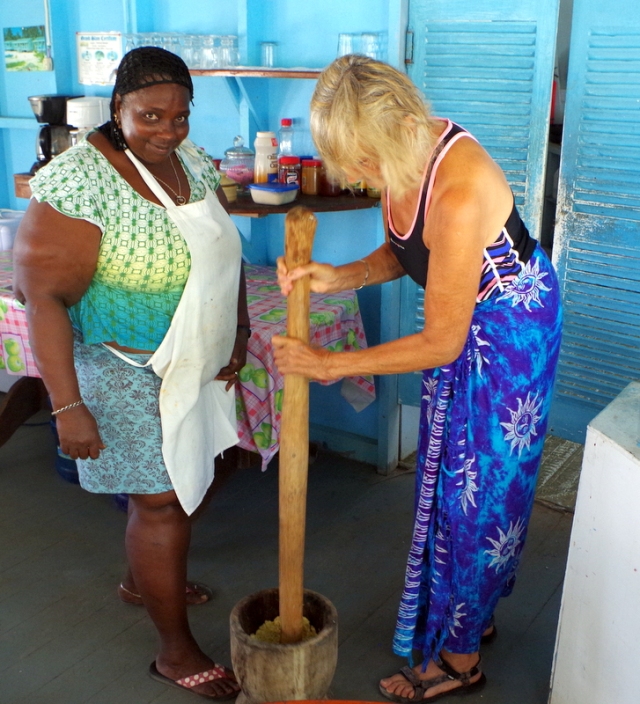 We ate one of them ! Conch. 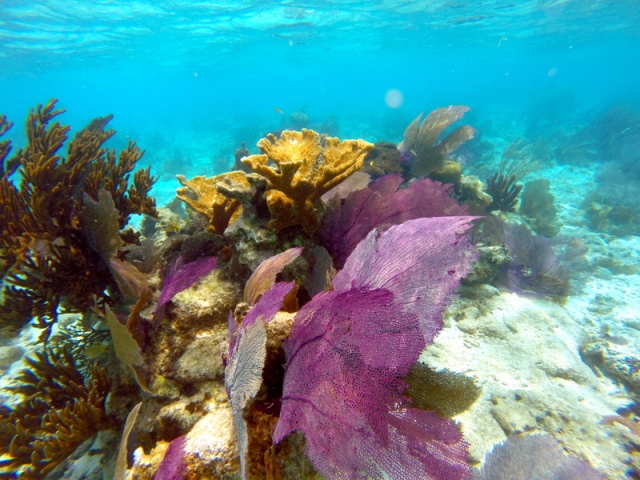 Here a short video clip of our time there:

There was a constant light breeze that kept us cool and the hammocks under the palms were great for after-snorkeling-naps. We spent three nights there and then got a boat ride back to the mainland. Our camper was parked safely in Captain Firmins fenced yard and was guarded by his big dogs, a Bullmastiff and a Malinois. “Sheep in wolfs clothing”. It was hot again, the thermometer climbed to 40 ° C and I was so very glad that we have  air conditioning in our truck. We decided to head for the mountains of Guatemala to find cooler temperatures.

This entry was posted in Belize. Bookmark the permalink.