Ecuador, land of  volcanos. “The spine of the Andes” runs through the middle of the country and crosses the equator. To the east the land drops off to the Amazonian jungle, to the west to the fertile lowlands and the Pacific coast. The mountain climate ranges from mild in places like Quito, to cold and colder as you go higher. In the lowlands it gets hot and in places humid. Our first stop was at the Finca Sommerwind near Ibarra. A great place to hang out and regroup. Günter got the tire patched, it had been losing air and we found a nail and a screw in it. He rode the bicycle around the lake a few times and to the store while I was lazing around the finca. 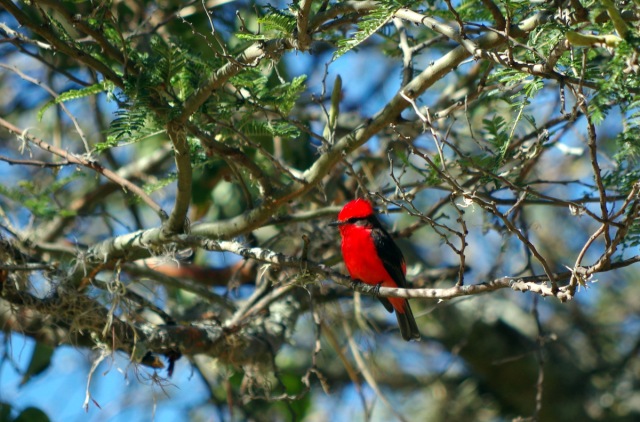 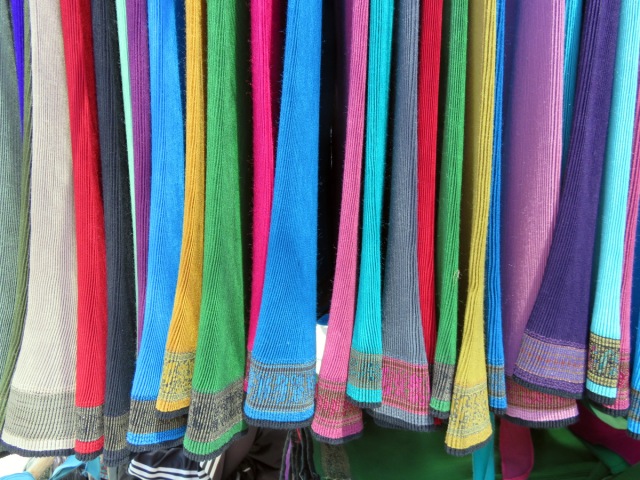 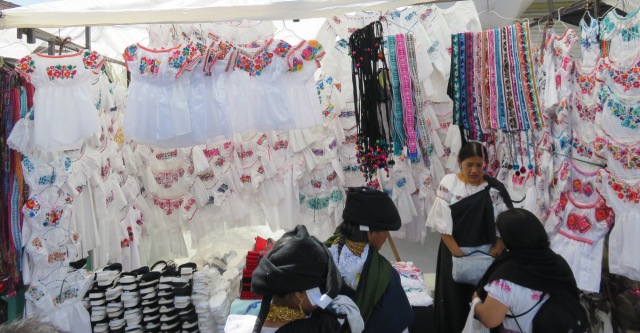 I love that Picture! 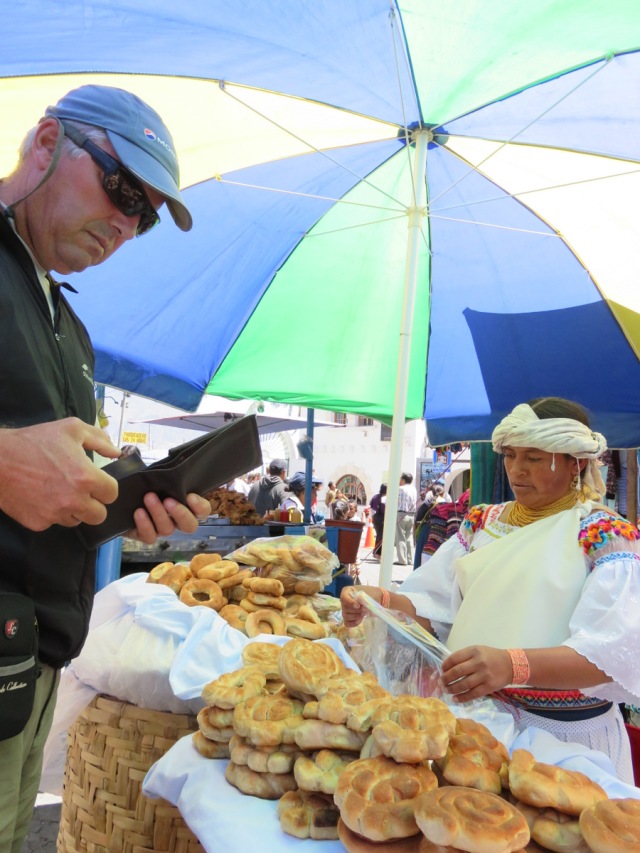 Couldn’t pass them up.

After a visit to Otovalo we drove to volcano Cayambe, crossed the equator a few times and then spent a few days at Quilotoa crater lake. More than ten years ago we had been there as backpackers and at that time only a ramshackle building stood on the wind-swept plain near the crater. Now there is a thriving tourism infrastructure, artisan shops, restaurants and places to stay. What a difference. Tourism has a dark side as well of course and we found out quickly that if you try to take a picture of an alpaca, lama or people you are told that you have to pay in no uncertain terms. Well, my alpaca photos were free, but it takes the fun out of an experience if you leave an angry person behind.

Hard to see, but the white stuff on top is the glacier. 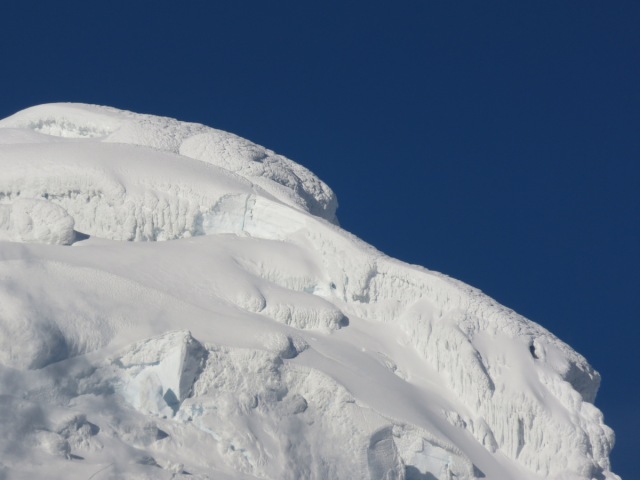 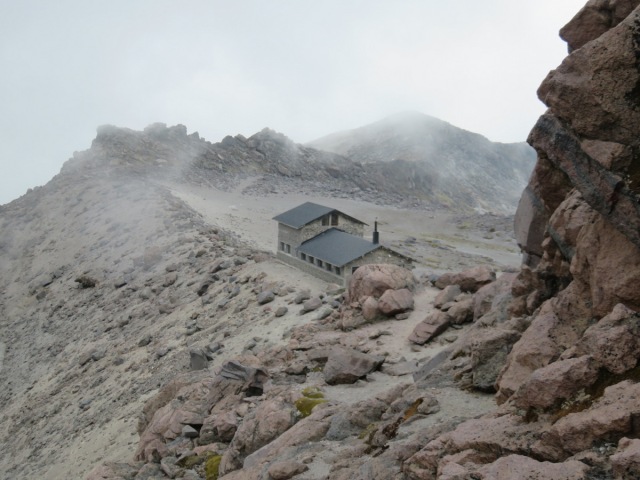 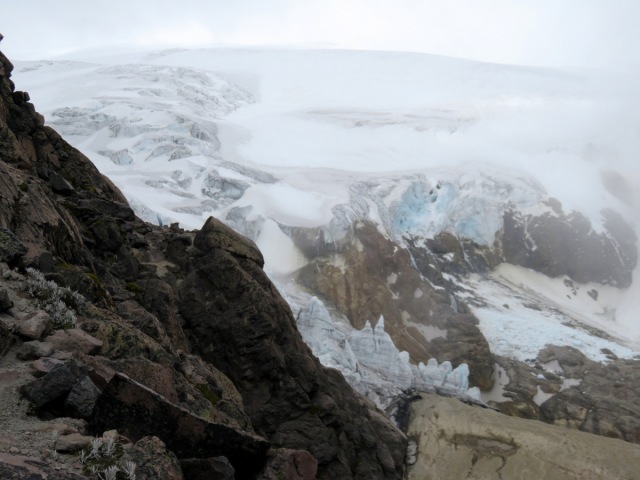 Günter wanted to hiked around Quilotoa crater and decided to go my own way and followed a foot path down through steep fields of lupins to a little settlement at the edge of the canyon. From there I climbed back up to a ridge. The air is thin at almost 4000 m, so it took me a while. On the ridge a woman was threshing her lupin harvest and after I watched her for a while I asked her a few things about the beans. They are called chochos and taste very good, need to be soaked and boiled first (with lime?), she also grinds them into flour. It is a form of domesticated lupin. Anyway, I shared the better part of my lunch with her and then helped her with the threshing( I actually developed two blister on my hand ) Finally a friend of hers came down the ridge and brought lunch, potato soup. Meanwhile Günter had called me on the radio to let me know that he was back from his hike, so I bid my farewell. At the camp site we were met with a nice surprise, Vroni and Michael as well as Lise and Laurent had arrived, friends and fellow overlanders. We built a fire in the evening and exchanged stories about our trip. 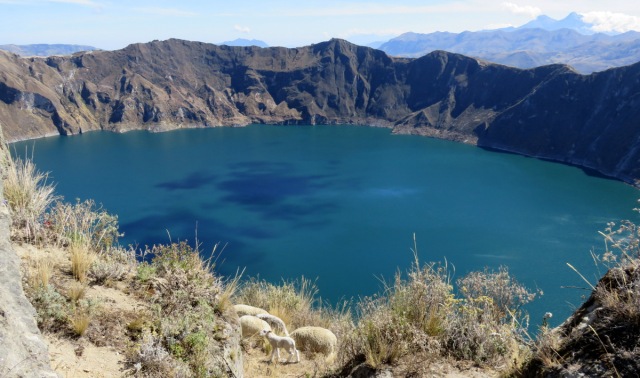 The trail around the lake.

The apple was part of my lunch…. 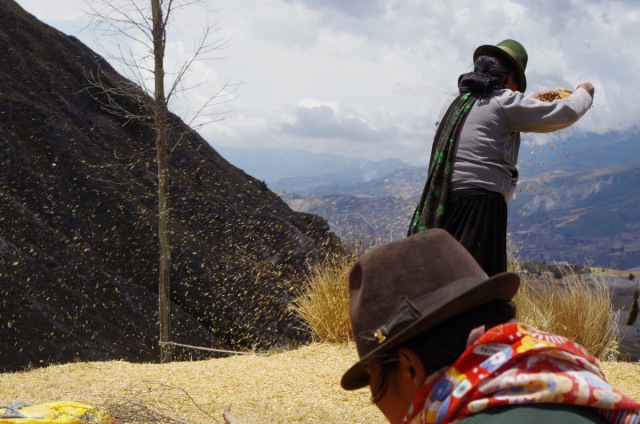 Before we left the area we went to the market. 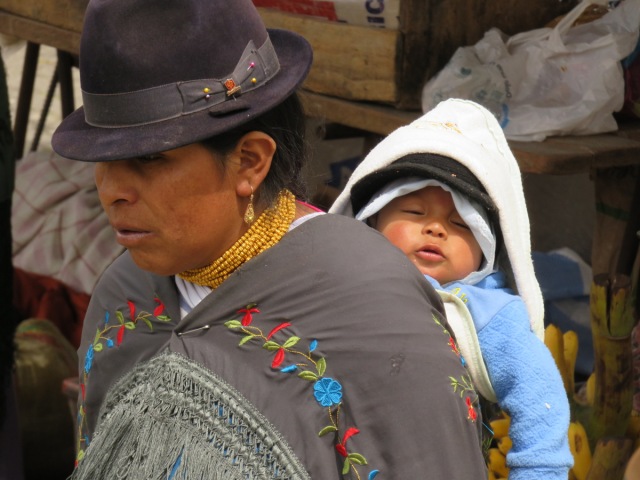 Since we had not been on a beach since Central America and felt like eating some fresh fish we decided to go down to the Pacific coast. Puerto Lopez is a busy fishing town and we spent a lot of time looking at boats and nets, talked to fellow fishermen and of course ate lots of fish, especially ceviche. The seiners were laid up, but there were gillnetters and longliners, fishing out of small boats, they brought in all kinds of little fish and many large billfish. We camped at Isla Mar, on a bluff overlooking Salango, an even smaller fishing town. At the edge of town is a fish meal factory and the main employer. They produce fish meal for pellets to sell to the Chilean farmed salmon industry. With its perfect crescent beach full of pangas, a rock out cropping and the fish factory at the end , Salango reminded us of Cabo San Lucas on the Baja 35 years ago. When we first went there many years ago, this is what it looked like and yes, Cabo had a smelly tuna cannery at the edge of town. 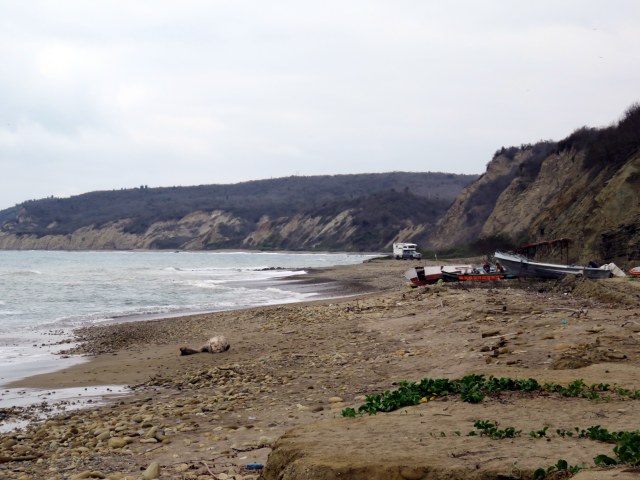 Wild camping at its best! 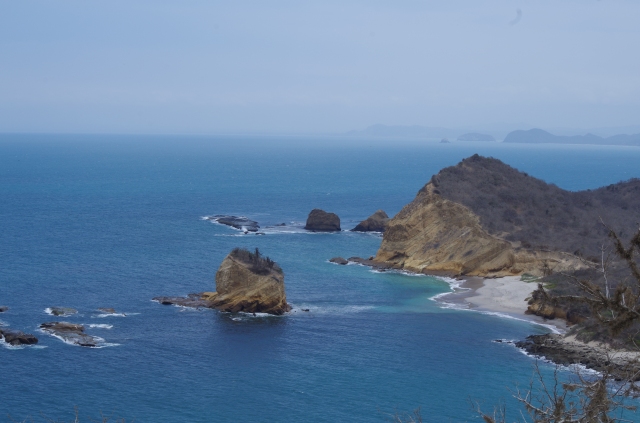 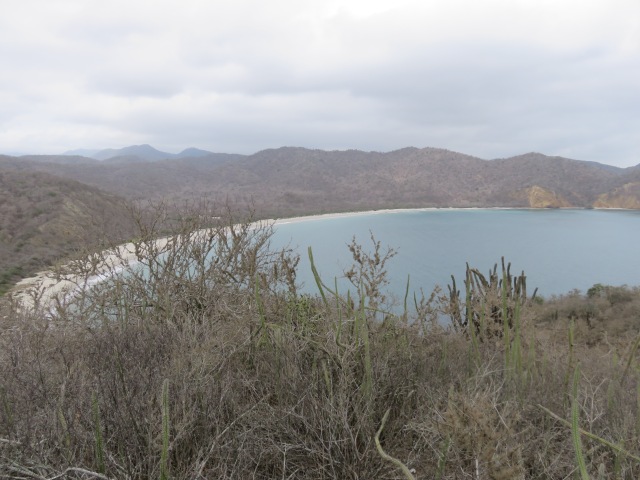 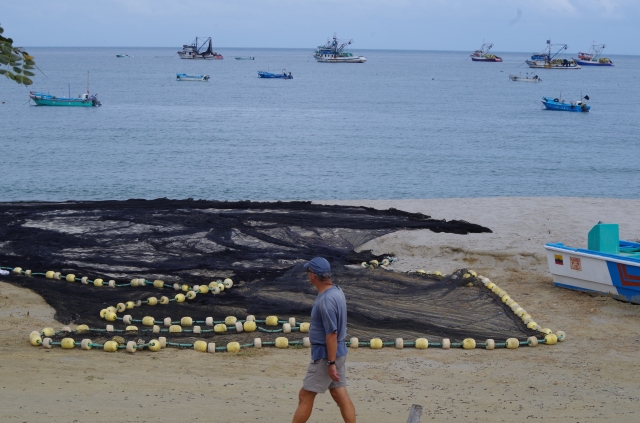 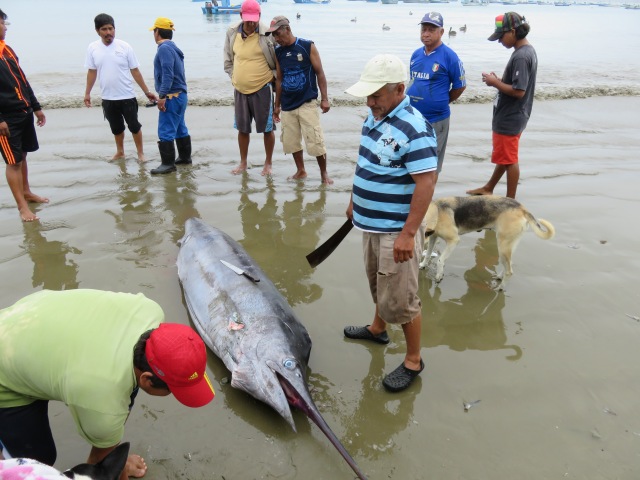 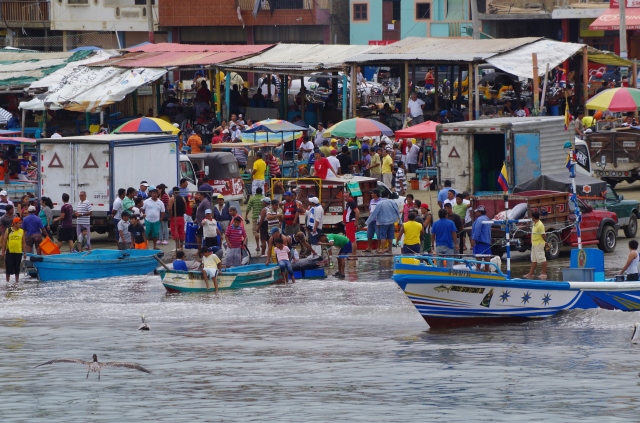 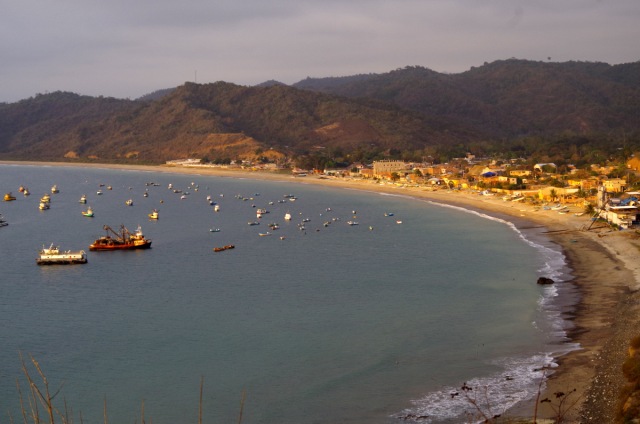 Salango with fish meal plant on the right. This was the view from the camper. 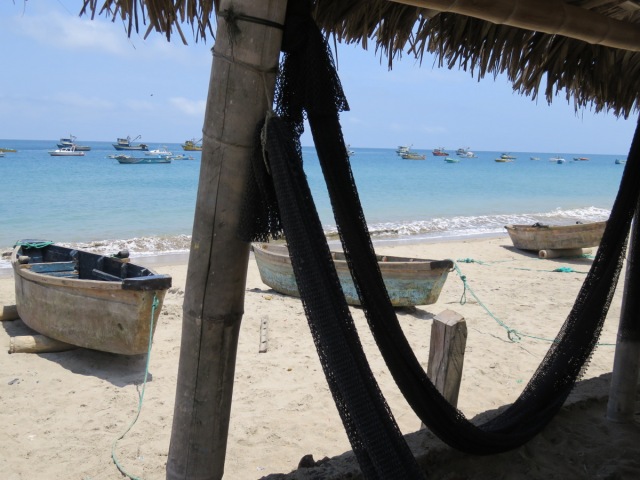 A boat trip to Isla de la Plata is a must if you are here and have time. The humpback whales hang out here to mate and have their young. Like our Alaskan humpback do in Hawaii.

The island is 40 km off shore and there were fourteen of us on the boat, the sea was rough and some people got seasick. We saw a pod of six whales, most of them have left for the south and the antarctic summer. The hike on the island was nice and it was fun to watch the blue footed boobies and frigate birds. There are a few albatross pairs but we were not allowed to go to their habitat, they do not do well with humans. Before we headed back to the mainland we went snorkeling, there are a few tropical fish and some turtles. I just enjoyed swimming in the sea again and did not bother with the snorkel part. 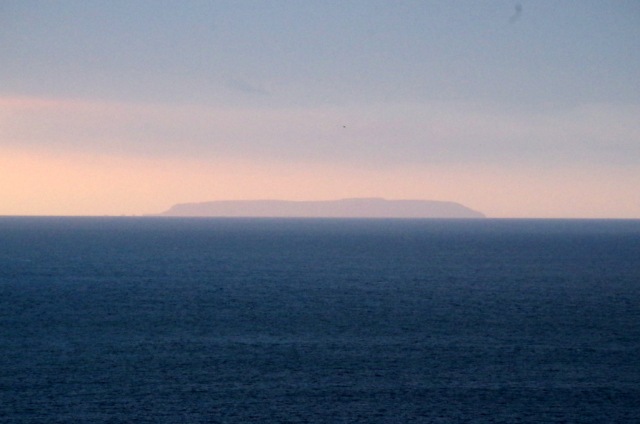 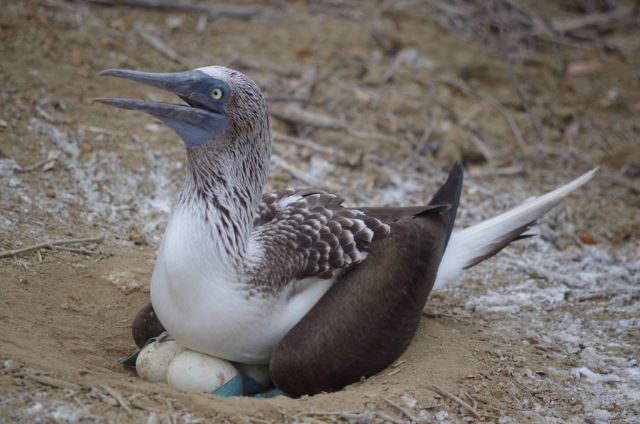 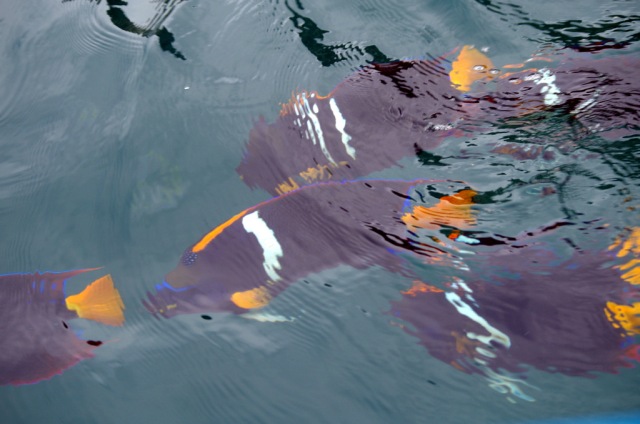 The pukers in the back…..

Today is September 29th, time flies and spring starts in the south. We are parked at the entrance to Chimborazo National Park. After wo days camping at Chinipamba, a little indigenous settlement at the foot of the volcano we drove higher today. Need to acclimate to the altitude, tomorrow we will go higher and then maybe hike to 5000 m.

Chinipamba is in the middle of nowhere and we happened to end up there because we saw a lake on the map and thought we could maybe stop there for a few days. But the roads on the map are not always reality, the first lake had a water slide and cinderella castle (no thanks) and the way to the second lake did not exist. So we kept on going on a different dirt road, higher and higher, by now it was 6 pm, finally when we came around a corner and saw Chimborazo bathed in the sunset. A great place, so we just asked some locals if we could stay at the edge of a field. The next two days we met the whole community and had constant visitors, when we went for walks through the fields they would come up to us and shake our hands to welcome us. They showed us their guinea pigs, hogs and cows, potato and quinoa fields and brought over boiled potatoes for dinner. When we told them that guinea pigs are mascots where we come from, and that we would never eat them, they thought we were crazy and reassured us that they taste delicious. Well, I finally told them that in countries like China they eat dogs and then they were shocked, said they love their dogs and can’t imagine eating them. Günter showed them how to play horse shoe and played soccer with them. The night of the RED MOON they built a fire near our camper and we all watched the moon change, it was an unforgetful experience, to stand there at the foot of a 6000 m volcano and see this phenomena. 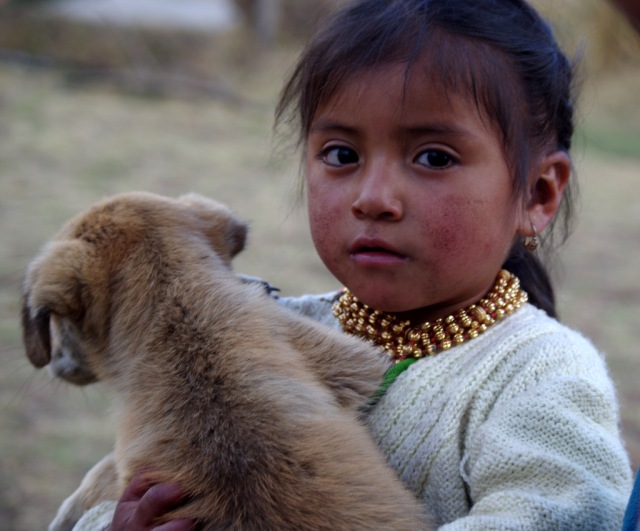 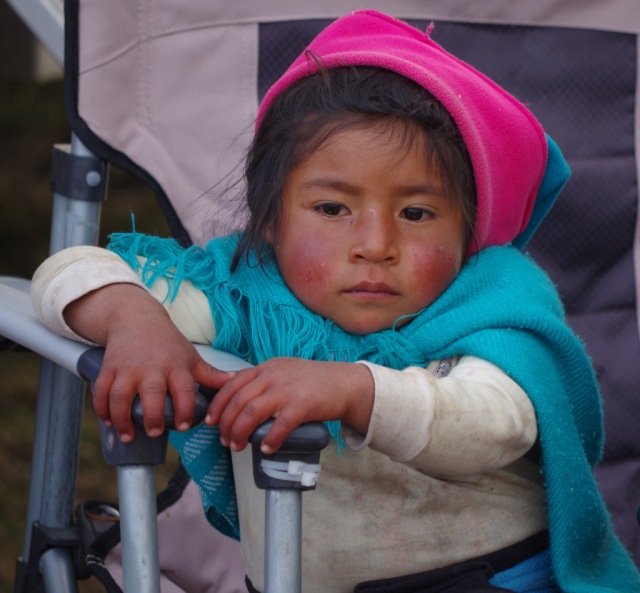 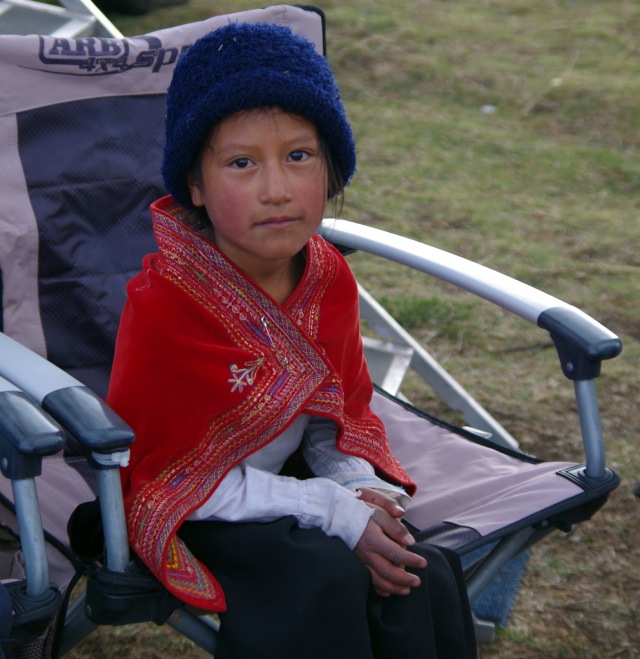 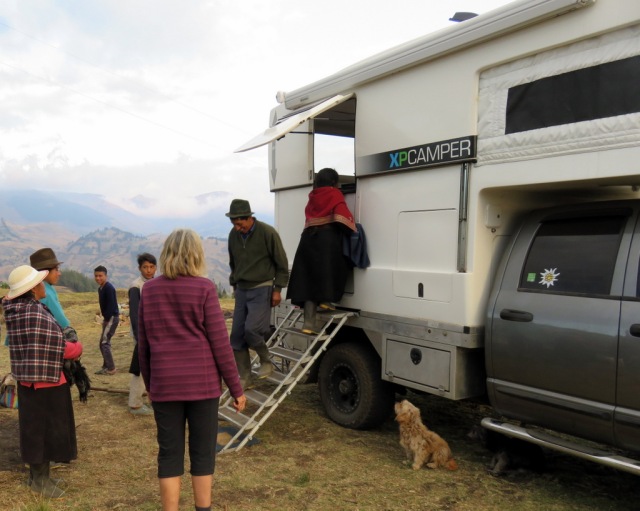 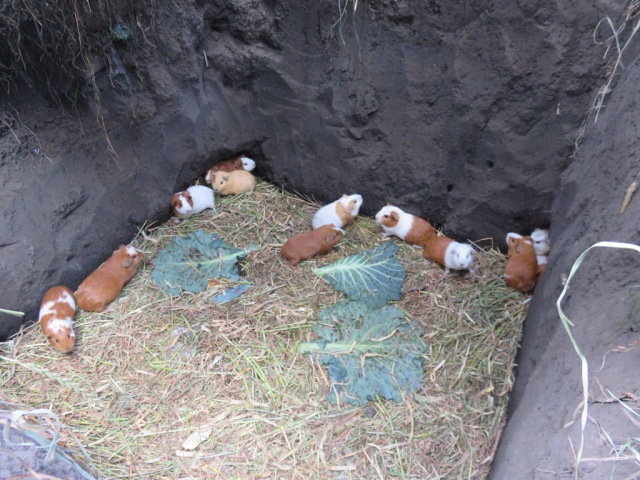 Grandmas “cuy barn”, the favorite on the dinner menu! 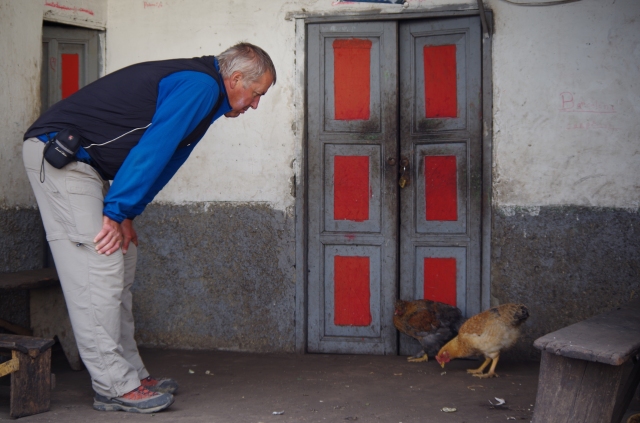 Hiking in the foothills of Chimborazo is beautiful. 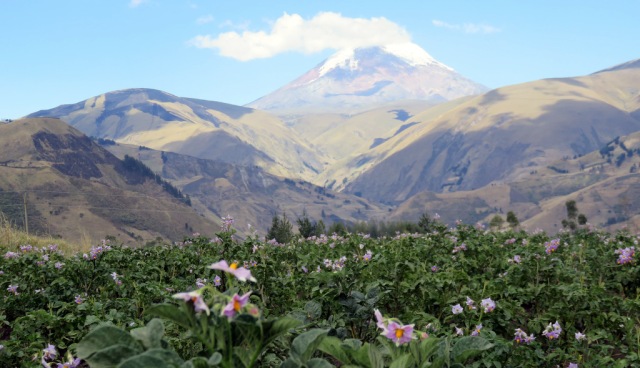 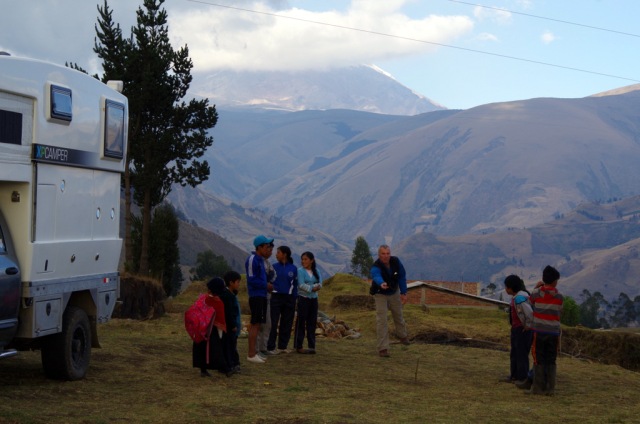 Playing horse shoe, a new game for the kids.

This entry was posted in Ecuador. Bookmark the permalink.