When we talked to our Mexican friends this fall they warned us about this state.

There has been some unrest and a lot of media attention. Gang rivalry is a problem for the people of this state.  But we also read about the beautiful and remote beaches, largely untouched by large scale tourism yet. We also read about the indigenous people, mountains, lakes, hot springs and the annual gathering of the Monarch butterflies.

So we decided to go for it. After we spent a week with our snowbird friends in La Manzanilla and Melaque we filled our 70 gal water tank, stocked up on groceries in Manzanilla and then headed south along the coast.

And what a beautiful coast it is, the road winds through lush countryside, past little towns and many many beautiful beaches ringed by palm trees.

We stopped at La Ticla, a popular surf beach and here we stayed for a few days. We don’t surf, but we did have a good time with the surfers.

Our hamaquera at La Ticla. Jason from Canada to our right.

Since the waves are too high for me to go swimming I decided to swim in the river (Lonely Planet says it is swimmable), that was short lived though. When I was waist deep in the river and just about to make the plunge, a big hog surfaced like a hippopotamus near the river bank, two more pigs came out of the bushed and dropped in. That was enough for me; I decided not to join them.

We drove on after a few days, in search of a swimmable beach for me. But there had been some stormy weather and no calm seas were in sight. We camped at a few more beautiful beaches, went for long hikes and read in the hammock. El Faro was very nice, the people friendly and the beach beautiful, even here it was a little rough to swim. Camping is limited if you have a camper and impossible if you have a motor home or big RV. There are also two beautiful beaches for camping just north of El Faro: El Zapote ( km 177 dirt road) and La Manzanillera ( 174.5 km).

La Manzanillera with El Zapote beaches in the background.

Both have enramadas where you can park for a few pesos.  If the seas are calm enough you can swim and snorkel here. 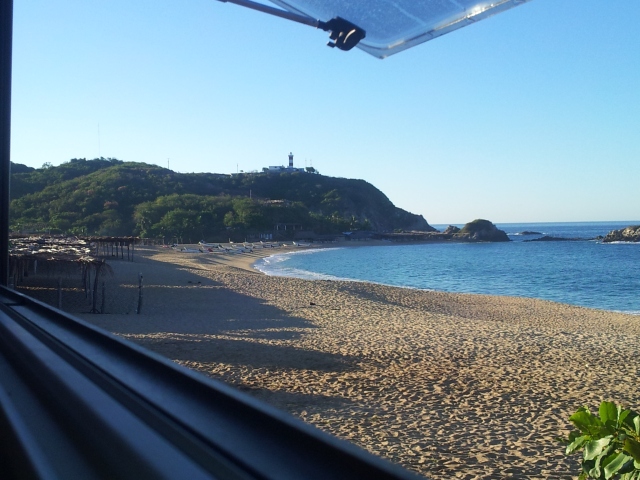 We enjoyed the children here, they brought us things like little ground doves and hung a dead snake on our fence. They also “helped” us with the Rosetta Stone lesson by telling us the answers haha. We bought raffle tickets for the school and the winning price was a 50 kg sack of corn.

Just in front of our camper there was a turtle nest (they are all over the place) and empty egg shells in the sand.

In El Faro we made some Mexican friends that asked us if we wanted to accompany them to a nightly visit to a Temazcal, “because it is winter and cold right now” they said. Well to us 85° F is not that cold, but like to go to the sauna back home, so we went along.

(The Temazcal is a permanent structure, constructed from volcanic rock and cement and is usually a circular dome. To produce the heat, volcanic stones are heated. Volcanic stones are safe because they do not explode from the temperature. They are then placed in a pit located in the center of the Temazcal.)

We walked with them through the little town to a farm where we sat around in the dark for a while and waited for the rocks to get hot enough. A few more people showed up and finally we were told to come to the entrance of the structure. There one after the other was “cleansed” with smoke from herbs before crawling inside through a narrow entrance.

It was great, there were twelve of us, we sat in a circle along the wall and the rocks were in the middle. One guy sprayed them with water occasionally and we were dripping with sweat and steam for about an hour. Back outside, wrapped in towels we sat under the full moon, with candles flickering between the banana trees and hibiscus bushed. It was a great end to our stay in the little town. 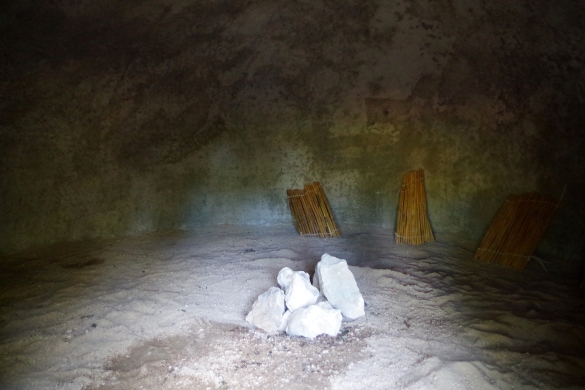 As we drove south we saw a lot of police and also several large groups of heavily armed citizens, usually they had check points at bridges and intersections with roads that headed into the mountains. We just kept on driving, I smiled and greeted all of them but not all smiled back. 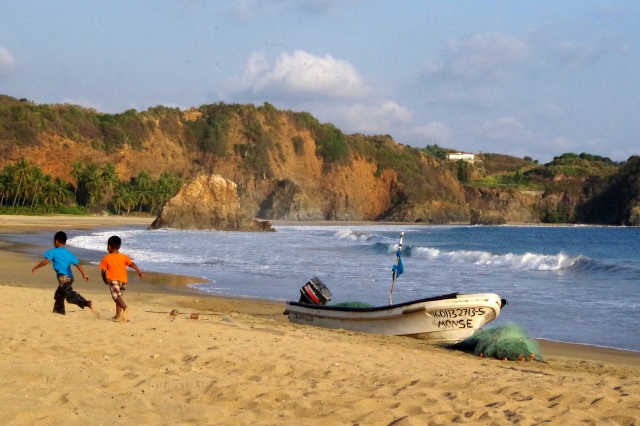 We stayed at a few more beaches, hung out beside enramadas that did not charge us for camping. In exchange we ate at their restaurants.

Parking near a net shed made us feel right at home. We were here for several days, the owners of the enramada were very nice. Grandma made fresh tortillas every morning right beside our camper and woke us up with the gentle pit pat you hear all over Mexico. Her huevos rancheros were very tasty.

After 10 days of bliss we decided to head back toward the cooler mountains and drove north to Uruapan and Patzcuaro.